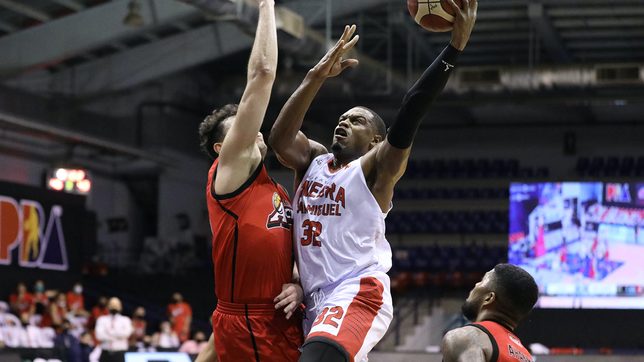 CONSISTENT. Justin Brownlee plays like he never left the PBA as he submits his usual numbers in his first game back.

MANILA, Philippines – Justin Brownlee has fallen in love with playing in the Philippines that he considers it a “dream come true” to be back in the PBA.

Brownlee saw action in the PBA for the first time in nearly two years as he powered Barangay Ginebra to an 80-77 win over Alaska in their Governors’ Cup opener on Sunday, December 12.

Gin Kings head coach Tim Cone bared the team tried to bring in Brownlee before the previous Philippine Cup, but strict travel restrictions kept him from returning to the country which has already embraced him as its own.

“A long time coming,” said a relieved Brownlee. “To be honest, it has been so long, it was like a dream come true to be honest.”

Brownlee barely had time to practice with Ginebra as he arrived in the Philippines exactly a week before the conference tipped off last December 8.

The one-time Best Import of the Conference, though, played like he never left, putting up his usual numbers of 28 points, 10 rebounds, 4 assists, 3 steals, and 2 blocks in 42 minutes of action.

“It was just good to be back playing for Ginebra and out here in the Philippines. It was a pretty good way to start the conference us,” Brownlee said.

Brownlee also did not find it hard developing chemistry with a number of new players on the team.

Since Brownlee last played for the Gin Kings in January 2020, the team has acquired the likes of Christian Standhardinger, Sidney Onwubere, and Jesper Ayaay.

“[There are] a couple of new faces but they come in and buy into the system very well and blend with the team and always come with good energy so it was good playing with those guys, the new guys,” Brownlee said.

Still, Brownlee said he has things to work on, admitting he is far from his peak form that enabled him to lead Ginebra to four PBA championships in his first seven stints with the squad.

“I think I still have a bit to go to be all the way to game shape, especially like I was before. But I’m just trying to work out as much as I can.” – Rappler.com