Montalbo erupts for career-high 22, gets praised for defense on Bolick 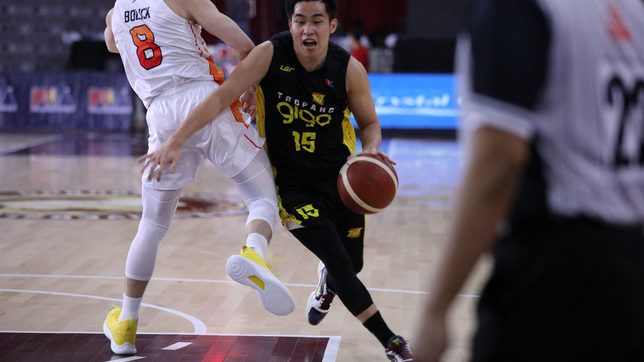 ON A ROLL. Kib Montalbo delivers another solid performance for league-leading TNT.

As TNT Tropang Giga star rookie Mikey Williams continues to be the talk of the town, and rightfully so, another young TNT guard has been quietly showcasing his improvement in head coach Chot Reyes’ system: Kib Montalbo.

Shortly after scoring 13 points back-to-back against San Miguel and NLEX, the feisty floor general erupted for a career-high 22 points on 8-of-13 shooting and 4-of-6 from three in a 102-92 win against the streaking NorthPort Batang Pier.

Not only did the Tropang Giga snap the Batang Pier’s winning streak at three, they also clinched the top seed in the 2021 PBA Philippine Cup, and with it, a twice-to-beat advantage as well.

Although Montalbo’s scoring punch was noteworthy in itself, Reyes also gave props to his ward’s known scrappiness on defense, which he also used to help clamp his former La Salle teammate Robert Bolick to just 12 points on a cold 3-of-16 clip.

“Kib, Brian Heruela. They picked him up 94 feet. They made it very difficult for him,” he said.

“When he gets in the front court, it’s a complete team effort. I don’t think there’s anyone in the league who can stop Robert Bolick one-on-one. But it takes a tribe to do that. That’s our belief.”

“Kib’s a dog. Just a dog. He’s giving us that little energy spark that we need day in and day out, you know, picking up 94 feet; picking on, most of the time, the best challenges that we have,” chimed in Williams, who again erupted for a game-high 29 points.

“He’s holding his own, he’s doing really well, and I applaud him. He’s gonna continue to get better, you know, we’re all pushing each other, we’re all finding ways to get it done.”

With the playoffs just around the corner for TNT, Montalbo will have more chances to prove to the coaching staff that his championship-winning mentality back in college can translate to the PBA as well.

“Kib has been putting in the work in practice, extra shots, spending time in the weight room, extra conditioning. I think it’s showing on the basketball court,” Reyes said.

“We want to make sure that we have guys we can count on, who can deliver, who can step in when certain players are not playing well, or are not making their shots. Hopefully we can just continue that.” – Rappler.com