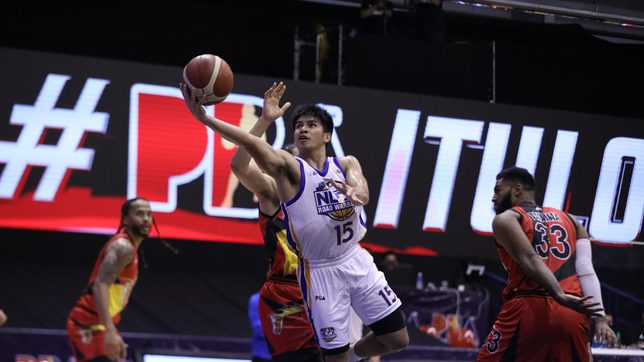 ABSENT. NLEX tries to move on minus Kiefer Ravena.

Facebook Twitter Copy URL
Copied
‘We will need every warm body if we get deeper into the playoffs,’ says NLEX coach Yeng Guiao

The NLEX Road Warriors are right in the eye of a standings storm in the 2021 PBA Philippine Cup as the final playoff spots could be decided by the slimmest of margins in the conference’s home stretch.

Currently sitting at a dead even 5-5 record without Japan B. League-bound star Kiefer Ravena, NLEX is uncomfortably perched at sixth place with the NorthPort Batang Pier and the battle-tested defending champion Barangay Ginebra nipping at their heels.

As such, even though head coach Yeng Guiao kept Ravena’s name in the roster with the hope that he would come back in time for the playoffs, he admitted that his possible return is just not a part of the Road Warriors’ concerns and priorities right now.

(I don’t have much news with Kiefer. We’re not sure what his status is but we’re thankful that he sent a lot of chicken meals to the hotel.)

“He’s in our Viber group. He’s messaging the guys, encouraging them, but so far, maybe if we reach the quarterfinals and get lucky, only then we’ll think about how he will be recalled,” Guiao continued.

Right now in Ravena’s absence, the rest of the Road Warriors are picking up the slack by committee while reserve guards like Philip Paniamogan continue to gain confidence with extended minutes on the court.

Against the guard-heavy Blackwater rotation, the 30-year-old dropped a conference-high 14 points on 4-of-10 shooting from deep, and finished with a game-best +27 differential.

“We’re glad, because there will be times that Kevin (Alas) and Jericho (Cruz) will not be scoring as much, but they will still attract the defense. Philip will be there to floor-space, and create opportunities for the three-point shot. That’s exactly what he did,” Guiao said.

Without Ravena there to be the go-to facilitator and shot creator, NLEX will have to continue sharing the load on both ends of the court to guarantee a deep run in the conference playoffs if they do get a spot.

“We will need every warm body if we get deeper into the playoffs. But for now, we will focus first on our last game [against Meralco], Guiao said.

“I think at five wins, we are at least probably, at worst, we can get into a tie for eighth place. As much as possible, we’re trying to survive.” – Rappler.com