From ‘batang palengke’ to ‘Pinoy Sakuragi’: Pingris retires as an icon

DETERMINED. Marc Pingris endeared himself to Filipino fans with his gritty performances for Gilas Pilipinas.

Facebook Twitter Copy URL
Copied
Marc Pingris walks away from a sport where he left every ounce of himself on the playing court, game in and game out

When Marc Pingris announced he was retiring from professional basketball, there was a collective, almost palpable wave of sadness that swept across the local hoopdom.

Perhaps it is because the man dubbed “Pinoy Sakuragi” has become a fixture in Philippine basketball after a career that spans over a decade and a half.  It could also be because he endeared himself to fans in the years he wore the national team jersey.

Perhaps another reason is that Pingris embodied the lives and aspirations of the average Filipino; his story of unwavering industry and determination in trying to uplift his family’s condition was a tale that resonated with most people.

Putting the work in

He has always been vocal about learning from his mother Erlinda the value of plain, old-fashioned hard work. He had no blueprint to escape the difficult life in the province other than to excel in the sport he loved.

“In my mind, it was really just basketball. I thought to myself: I had to make it work. If not, I would just be a market fruit vendor,” he shared.

But even the game of basketball did not come easy for Pingris. He was always cognizant of his limitations.

“I was merely tall when I started playing. I was never the most skilled. So I had to compensate through my effort and my heart,” he admitted.

He was in his teens when he came to Manila after getting recruited by Chowking as part of its Philippine Basketball League junior squad. It was an opportunity that he almost squandered.

“I was a mama’s boy. I went back home to Pangasinan after around two months because I was homesick. People close to me dissuaded me from giving up. They asked, ‘What will you do back in the province?'”

And so he kept at it. He trained thrice a day to take his game to the next level. He put in the extra work to make himself a value-adding component of every team he joined. He knew he could outwork other players in his desire to become the best version of himself.

The best version of himself, he discovered when he got to the pros, came in the defensive end. He decided to devote himself to doing the unglamorous part of basketball – the part that required losing one’s self for the team and his teammates. He credits former Purefoods coach Ryan Gregorio for helping him find his niche as a defensive menace. Pingris’s impact on the game then went beyond the usual statistics that fans ordinarily attribute as the mark of a good player.

“I prepared myself to become a defensive specialist. I worked on my legs because I knew I needed to be quick and not heavy. I worked on my laterals. I also had to have the strength to push the bigger low post players,” he said.

Pingris won the PBA Defensive Player of the Year three times – a record he shares with Chris Jackson. He made the All-Defensive Team eight times, tied for second-most with Glen Capacio and Chito Loyzaga and next only to Jerry Codiñera, who has 10 citations.

He will undoubtedly go down in league history as one of the best defensive players. But what made Pingris unique among the all-time greats was his ability to defend any position on the playing court. 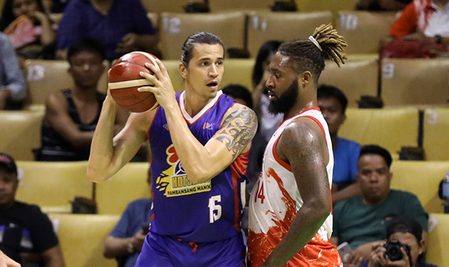 One moment, he would be given the unenviable task of banging bodies with his good friend June Mar Fajardo in the shaded area, then by the next quarter, he would be patrolling the perimeter and shadowing Alex Cabagnot or other San Miguel shooters.

“After practice, I would ask two to three of our team’s guards to do extra work with me. We had one-on-one games, but all I did was just defend them. I told them that if they score 10 points against me, I would treat them to whatever it was they wanted to eat or drink.”

It was not only in the PBA that Pingris’s defensive acumen was feared. Pingris became one of the cornerstones on which the defensive schemes of various iterations of the national team were built.

Gilas Pilipinas will always be special for Pingris and vice versa. He personified the grit and heart that the Gilas squad became known for.

“I won championships in the PBA, even a Grand Slam, but nothing compares to carrying the country’s flag and having your countrymen cheer for you,” he said.

Pingris points to Gilas’ win over Korea in the 2013 FIBA Asia Championships as the most memorable game he has ever played in.

After that victory, the sprain and ITB injury he forced himself to ignore during the game finally caught up with him and kept him up until the wee hours. (READ: Fajardo thanks Pingris for being friend, role model in retirement tribute)

Hanging up his spurs

Pingris may have come a long way from his underprivileged beginnings, but he has not forgotten where he came from. He cites the discipline instilled in him by his mother and siblings and the constant reminders from people who have guided him his entire career, such as his manager Ed Ponceja and former teammate Rommel Adducul, as the keys to keeping him grounded.

“They always tell me to stay humble. That no matter what I achieve in my career, I should never let it get to my head. I know there is no reason for me to be boastful. Deep down, I am still the same ‘batang palengke’ from the province.”

As the curtain to his long, decorated career came to a close, Pingris knows he has an entire lifetime ahead of him still. How he is on the court is reflected in how he is off the court when he is with his family. It is in this arena – on the home front – that Pingris looks forward to giving the same all-out intensity and love.

“A huge part of the success in my career is because of the love and support of my family, especially my wife Danica. It is no secret that it was through her effort that I got to meet my father. So I can say she helped complete me. And so I always want to give back to her and my family whatever it is I can give.”

Walking away from the game one has spent an entire lifetime playing is never easy, Pingris admitted, but there are other things he looks forward to doing now that he has the privilege of time.

“Danica and I will be starting a business which I am very excited about. I also look forward to riding more and driving to different places.”

Philippine basketball will look a little different without Pingris in the landscape. His defensive genius will be the gold standard by which present and future defensive big men will be measured.

Pingris is walking away from a sport where he left every ounce of himself on the playing court, game in and game out. One can only hope the younger generation will learn to emulate Pingris’s genuine love and passion for the game. – Rappler.com