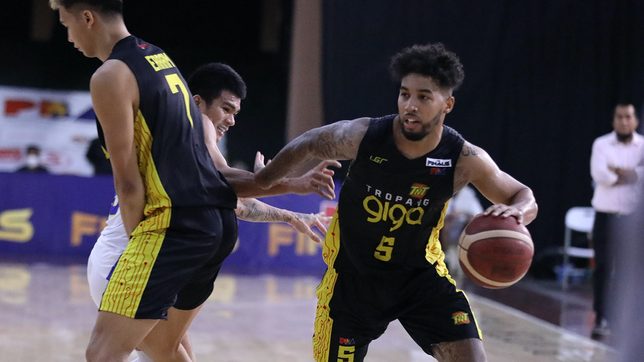 BACK-TO-BACK. Mikey Williams and TNT have won Games 1 and 2 of the PBA Philippine Cup by double digits.

Mikey Williams may be having his way in the PBA Philippine Cup finals as he keyed TNT to a 2-0 lead, but he is not counting Magnolia out.

The star rookie maintained a laser focus on the task at hand after the Tropang Giga withstood the Hotshots’ second-half charge to pull out a 105-93 victory on Friday, October 22.

Up by as many as 21 points, Magnolia trimmed its deficit to just 4 points in the fourth quarter before Williams took charge late and finished with 28 points, 9 rebounds, and 6 assists.

“As you can see, second half, it was tough, a lot of mental errors, a lot of mistakes on our behalf,” said Williams.

“We just got to get back to the drawing board and fix those nicks and bruises and go from there. As you can see, we’re playing a tough team and we can’t take anything lightly.”

It has been a stellar maiden finals stint so far for Williams, who averaged 24.5 points, 9.5 rebounds, 5.5 assists, and 1.5 steals in the first two games.

He then set a new personal playoff-high with 28 points as he turned Game 2 into a shooting clinic, sizzling early with 14 points in the first half and finishing strong with 8 points in the final quarter.

“It’s new to me. This is my first finals appearance,” Williams said when asked about the atmosphere in the finals.

“I came in not knowing what to expect but just relying on what the coaches are saying and my teammates are doing and just following in their lead,” the Filipino-American guard added.

Williams is expected to be a marked man as the Tropang Giga shoot for a commanding 3-0 lead in Game 3 on Sunday, October 24. – Rappler.com