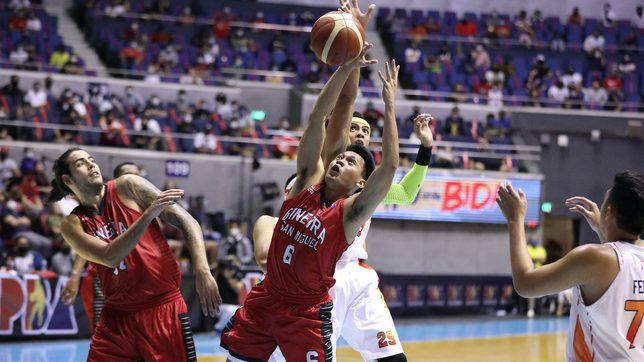 MANILA, Philippines – Newlywed Scottie Thompson returned just in time to help Barangay Ginebra deal NorthPort a 108-82 rout in the PBA Governors’ Cup on Friday, December 17, as the Gin Kings rolled to a 2-0 start despite a shorthanded lineup.

Ginebra head coach Tim Cone lauded the effort of Thompson, who flirted with a triple-double of 8 points, 8 rebounds, 8 assists, and 2 steals a day after his wedding.

Thompson tied the knot anew with his wife Jinky in a beach ceremony in Davao, six months after their civil wedding.

The Gin Kings saw another one of its key players get bitten by the injury bug as star guard Stanley Pringle went down with a “knee issue.”

Pringle, who tallied 7 points, 4 rebounds, and 3 assists in their conference-opening win against Alaska last Sunday, sat out against NorthPort to get his knee checked.

“We’re hoping it’s not too serious but he had to sit out tonight,” Cone said.

“But there’s a chance it could be serious. We’re trying to find out more information about it.”

Aside from Pringle, Ginebra also continues to miss the services of other injured standouts Aljon Mariano, Jared Dillinger, Joe Devance, and Mark Caguiao.

Fortunately for the Gin Kings, several locals stepped up to complement another all-around performance from import Justin Brownlee, particularly Thompson.

“Scottie getting back up here after his wedding was really important for us because of our lack of manpower,” Cone said.

“[His] presence was absolutely crucial with Stanley being out tonight.” – Rappler.com