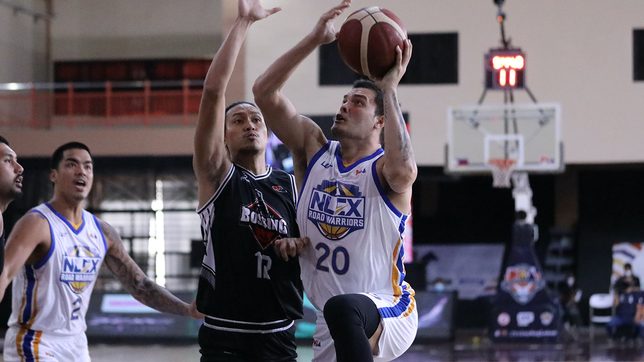 NEW TEAM. Will McAloney (center) parts ways with NLEX after two years with the team.

Big man Marion Magat is set for a reunion with the NLEX Road Warriors.

The Road Warriors plan to send Mike Ayonayon and Will McAloney to the Blackwater Bossing in exchange for Magat and a future second-round pick, NLEX head coach Yeng Guiao bared.

Guiao said the Road Warriors submitted the trade papers to the PBA on Monday, November 15, and are waiting for approval.

“We are always on the lookout for bigs who can give us better size and Marion fits that role since he has already played for us before,” Guiao said.

Magat last saw action for NLEX in 2019 before he got shipped to TNT as part of a three-team trade involving Jericho Cruz and Mike Miranda.

The former NU Bulldogs slotman then found himself on the move again, this time to the Bossing, following another three-team trade that saw Poy Erram part ways with the Road Warriors and join the Tropang Giga.

Magat averaged 5.5 points, 4.8 rebounds, and 1 block in the previous Philippine Cup as Blackwater finished dead last with a 0-11 record.

Guiao said Ayonayon and McAloney will get a chance to strut their stuff for the Bossing.

Ayonayon and McAloney, who were drafted by NLEX in 2019, played limited minutes in the all-Filipino conference and averaged measly numbers.

“It is also good for Mike and Will since it has been difficult for them to play significant minutes in our rotation,” Guiao said.

“They will get better opportunities at Blackwater where they can maximize their potential.” – Rappler.com