Not so Hotshot anymore: why Purefoods is in a slump

MANILA, Philippines - The script for the Purefoods Star Hotshots this 2015 PBA Commissioner’s Cup quickly switched from “They’re back!” (from their disappointing Philippine Cup performance) to “What the hell happened?”

The team went undefeated in their first four games, a stretch in which they were destroying opponents by 17.5 points per contest and looked like favorites to repeat as champs of the second conference.

Their first loss to Rain or Shine, 78-71, was shooed away by pundits as a slight bump in the road against a championship contender that even head coach Tim Cone called their “contrapelos (rivals).”

But that was quickly followed by an uncharacteristic 11-point defeat at the hands of KIA Carnival, and then a second straight Manila Classico loss to Ginebra, 96-87. Suddenly, Purefoods is 4-3 and garnering one of eight playoff seeds no longer looks as assured as it did a week ago.

What changed? The obvious difference many will be quick to point out is the replacing of imports. The Hotshots were deadly with Marqus Blakely, leading a fast-paced offense and patrolling the defense. But he was originally their choice for the Governors’ Cup, and played in this conference only as a temporary solution while the team awaited the arrival of their Commissioner’s Cup choice.

That choice was Daniel Orton, a former Kentucky Wildcat whose NBA career quickly hit bottom following failed stints with the Orlando Magic and Oklahoma City Thunder. His debut was acceptable, seeing as Purefoods obliterated NLEX 87-62, while he put up 16 points, 12 rebounds, and 3 blocks and committed just 3 fouls.

His statline in the loss to ROS - 23 points, 23 rebounds, 7 blocks - shows that he was a monster, but his battle with foul trouble and unfamiliarity with the team’s systems were bigger factors that determined the outcome of the matchup. Nonetheless, many expected him to bounce back strong.

But then came the defeat vs. KIA, where Orton couldn’t keep from fouling again and was dominated by PJ Ramos. After the match, he out-stinked his performance on the court (18 minutes, 6 points, 6 rebounds, 6 fouls) by stating detrimental comments against Manny Pacquiao and PBA officials. “It’s a joke,” he said.

While Orton’s statements on the eight-division champion boxer holds merit, his performance this conference was a “joke” as well, and he admitted it himself by saying “I’ll come back harder and stronger.”

But he never had the chance to do so. Purefoods replaced him following the loss to the Carnival and brought back another familiar friend in Denzel Bowles, who was coveted by other teams this conference, according to multiple sources.

Bowles couldn’t play for another PBA squad because the Hotshots held on to his rights as a back-up plan even while playing Orton, and it turned out to be a smart decision. The big man led Purefoods (then called B-Meg) to the 2012 Commissioner’s Cup title and he still looks lethal as indicated by his performance vs. Ginebra on Sunday, February 22, putting up 31 points and 6 rebounds.

Purefoods has also dealt with injuries this conference. PJ Simon (back) has played only three games and just as he got healthy, the team lost James Yap (knee), who wasn’t in action in the defeats to KIA and Ginebra. Ask any coach and he will tell you altering rotations on a game-by-game basis can be very harmful.

Another reason for Purefoods’ current slump could also be the tougher opponents. Their four game winning streak came against teams (GlobalPort, Alaska, Blackwater, NLEX) with a combined 8-15 record. The three teams they lost to are a combined 9-9.

Maybe losing Yap (8.6 PPG) was more damaging than expected, or maybe the strength of their schedule has finally caught up to them. But whatever it is, the statistics show that the Hotshots’ play on both sides of the ball has definitely subsided as of late.

Purefoods’ defense has hit a roadblock since the start of their three-game losing streak. They were allowing opponents to put up just 76.5 PPG in their wins, but against ROS, KIA, and Ginebra, the Hotshots allowed 89.7 PPG.

In those wins, Purefoods’ counterparts shot the ball just 39.8% from the field and 30.4% from deep. In the losses, the opposition made 41.4% of their shots and hit 32.3% from downtown. The disparity isn’t wide, which shows the Hotshots have still forced adversaries to take tough shots when they get to set up their half-court defense.

But Purefoods is fouling more in those situations nowadays, and it’s correlating to the added Ls in their win-loss clip. In their four-game winning streak, the Hotshots’ opponents trooped to the free throw line just 18.3 times a game. Against ROS, KIA, and Ginebra, they allowed 22 trips to the charity stripe per contest.

Their offense (more on this later) has also played a role in their now struggling defense, as more turnovers by the Hotshots have led to easier scoring opportunities for their opposition.

Against GlobalPort, Alaska, Blackwater, and NLEX, Tim Cone’s team allowed only 10.5 points off turnovers. But in their three-game losing streak, that average rocketed to 16.3 per game.

In hindsight, the difference isn’t humongous. But allowing points off turnovers hurts the squad giving away the ball more than what the scoreboard shows. It can put their offense in disarray because of the careless mistakes, turn momentum of to the ballgame to the other club, and get their opponents’ fans up on their seats - which was the case against the always voracious fanbase of Barangay Ginebra - to ignite a potential game-changing run. 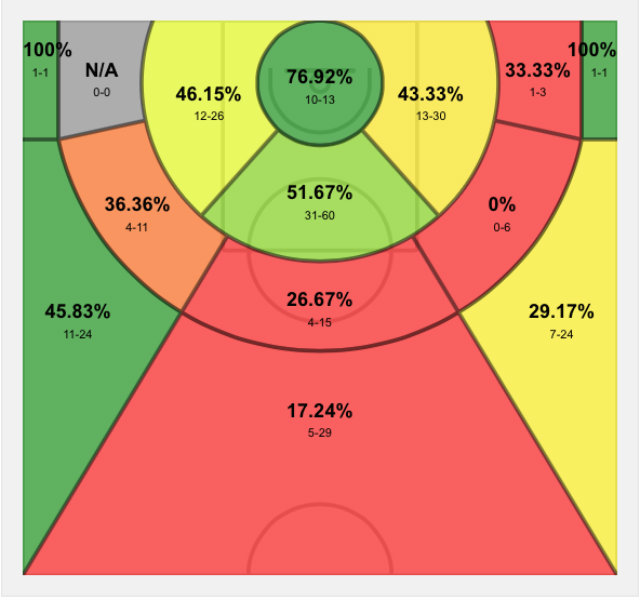 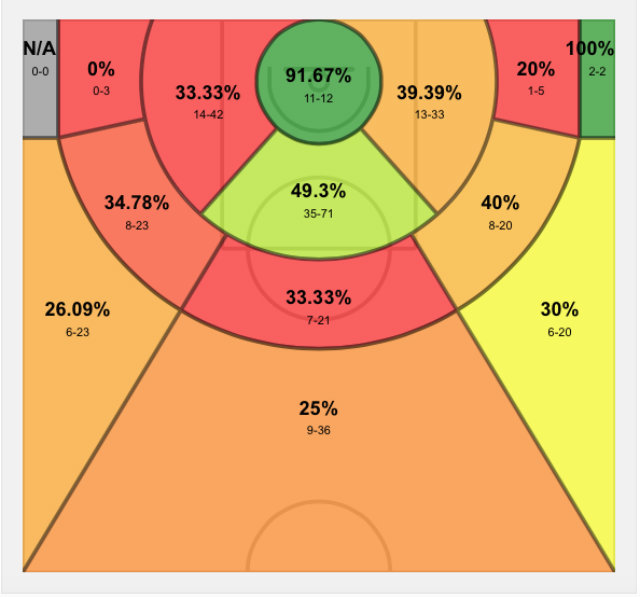 The biggest disparity is the amount of shots taken by the Hotshots’ opposition in the in-between area - the portions of the court in the middle of the paint and the three-point line.

Advanced basketball analytics say that the mid-range shot is the least efficient in the game. Purefoods’ defense - thanks in large part to Blakely’s versatility and ability to avoid fouling - did a great job of forcing jumpers from that area in their wins.

But in their losses, all of which Blakely was absent, the Hotshots’ opponents chucked up less shots from midrange because they were able to get to the free throw line more.

Losing Blakely hurts also because he was posting 5.0 SPG and 2.7 BPG averages. Furthermore, his defensive rating in three games was at 79.3, which is sixth best this conference and 18.7 points better than the league average of 98.

He might have been shorter than the imports he was facing at 6-foot-5, but he was no doubt better than all of them defensively when you take all important aspects on that side of the floor into consideration.

Orton was actually pretty stellar on defense, where his rating of 72.2 is the best in the Commissioner’s Cup. But his offensive rating, 95.2, far and away trailed Blakely’s 113.8.

Blakely’s ability to generate steals was so integral for the Hotshots, who were averaging 14.5 turnover points per game in their wins and only 7.7 in their losses.

But the worst impairment as of late has been their disastrous free throw shooting. Their 71.7% FT shooting clip in the four wins weren’t exactly ideal, seeing as that was only five points better than the league average of 66.7%. But in their three losses, Purefoods shot a pedestrian 59.9% at the charity stripe, which would rank second worst in the league if that was their average for the conference.

Right now, Purefoods’ biggest objective is to get Bowles adjusted to the team.

He doesn’t have the cat-quick speed Blakely possesses, which means Cone will likely have him drop down when guarding pick-and-rolls so he can protect the paint rather than risk getting left in his dust by quicker guards and forwards attacking the rim.

He also won’t generate as much steals as Blakely, who took advantage of his quickness perfectly against bigger and slower imports by swiping at the ball repeatedly, so Cone will have to use a more conservative defense that doesn’t involve as much half-court traps.

But Bowles’ 6-foot-9, 255-pound frame will come in convenient when it’s time to guarding opposing bruising imports such as an Ivan Johnson or a Solomon Alabi.

Out of Purefoods’ last four opponents, only the San Miguel Beermen (1-4) have a losing record. But all those four losses came when they had yet to utilize new import Arizona Reid, who had 29 points and 12 rebounds in his conference debut. The other three are Talk ’N Text and Meralco, who both lead the league standings with 5-1 records, and the 3-2 Barako Bull Energy.

The fight for a playoff spot doesn’t get easier from here with the quality opponents the Hotshots have coming up. It also doesn’t help that they need to acclimate another import to their system this conference, and that key parts in Yap and Simon are nursing injuries.

Statistics used in this article are courtesy of humblebola.com