MANILA, Philippines (UPDATED) – Tropang TNT import Ivan Johnson has been banned from the Philippine Basketball Association and fined Php 250,000 after cursing league commissioner Chito Narvasa, the league announced Saturday, February 13 during TNT’s game against the Meralco Bolts in the 2016 PBA Commissioner’s Cup at the PhilSports Arena in Pasig.

“For addressing the Commissioner with profanities and showing utter disrespect for authority, Tropang TNT import Ivan Johnson has been banned from the PBA and fined Php 250,000,” the league said in a statement via media bureau chief Willie Marcial.

Marcial said Johnson, 31, spoke the words “f*ck you” as he was looking away from Narvasa, who rose to his feet and pointed a finger at the player and had to be restrained by Marcial.

The choice words came at the end of Johnson’s rant as Narvasa was motioning for the reinforcement to keep quiet.

Johnson was ejected at 4:21 of the second period after incurring his second technical foul plus a flagrant foul penalty 1.

The San Antonio, Texas native and former Atlanta Hawks player was whistled for his first technical at the 9:02 mark of the second for second motion on Kelly Nabong. His flagrant foul came from elbowing Bryan Faundo on the face, and his second tech was after his encounter with the commissioner.

According to team manager Virgil Villavicencio, Johnson immediately left the venue at halftime with his family.

Villavicencio admitted he was puzzled by Narvasa’s actions when the commissioner stood up and left his box.

“I don’t know what he said, but the fact that he pointed and went out of his box, I don’t know what he wanted, eh inawat nga ni Willie eh (Willie was restraining him),” Villavicencio said. “You don’t go out of your box and you point to a player. I thought he was pointing at me or (TNT assistant coach) Josh (Reyes) e.”

Johnson was also previously banned from the Korean Basketball League in 2010 for flicking the dirty finger at a referee.

The comebacking import missed TNT’s first game as he served out a one-game suspension owing to a pre-conference punching incident during a tune-up game versus Blackwater. He was also fined Php 50,000 for the incident. 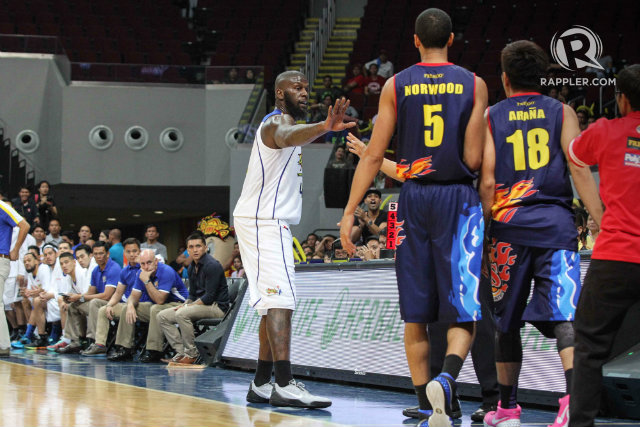 Johnson, who fast developed notoriety for his aggressive antics last season, finished with 9 points, 4 rebounds and a block in close to 16 minutes of play.

Johnson was fined Php 150,000 as well during last year’s Commissioner’s Cup after bumping Rain or Shine coach Yeng Guiao during Game 1 of the finals.

The last import to be banned from the league is Renaldo Balkman for choking Petron Blaze teammate Arwind Santos in 2013.  – Rappler.com