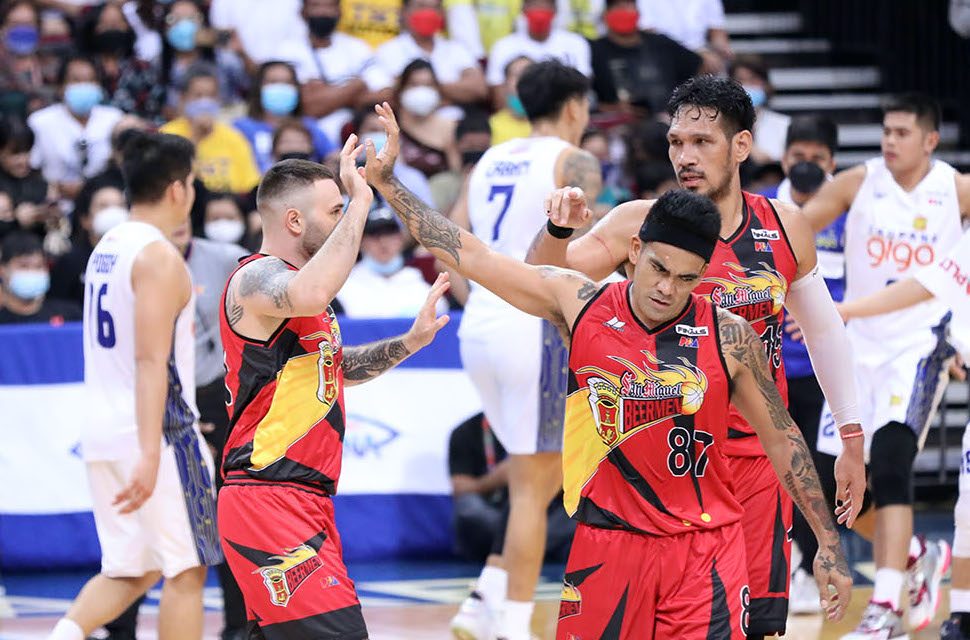 Facebook Twitter Copy URL
Copied
Playing for the first time in the title series, Robbie Herndon comes through with timely buckets in overtime as San Miguel outlasts TNT in Game 3 of the PBA Philippine Cup finals

MANILA, Philippines – San Miguel turned to an unlikely hero in Robbie Herndon and pulled off a thrilling 108-100 overtime win over TNT in Game 3 of the PBA Philippine Cup finals at the Mall of Asia Arena on Friday, August 26.

Playing for the first time in the finals, Herndon posted 8 points and 4 rebounds in eight minutes and sank timely buckets in the extra period as the Beermen took control of the best-of-seven series with a 2-1 advantage.

Herndon – who came in late in regulation after CJ Perez fouled out – scored 5 straight points to start overtime and ignited a 12-3 blast that enabled San Miguel to grab a 106-97 lead en route to the victory.

Those clutch overtime baskets from Herndon made up for his delay-of-the-game infraction in regulation that resulted in a costly technical foul, which prevented the Beermen from finishing it off in four quarters.

With the Tropang Giga trailing 93-94, Roger Pogoy calmly sank the technical free throw to tie the game with 12 seconds left in the fourth quarter as the defending champions forced an extra period.

Fajardo put the Beermen on his back in the first three periods before Herndon and Jericho Cruz took San Miguel home as it moved within two wins from reclaiming its All-Filipino throne.

Cruz led the charge in the fourth and overtime quarters, where he scattered 13 of his 18 points.

Marcio Lassiter chimed in 13 points and 4 rebounds for the Beermen before he fouled out with four minutes left in regulation, while Vic Manuel added 12 points – all coming in the first half.

San Miguel got timely contributions from team captain Chris Ross as well as he posted 8 points, 5 assists, 2 steals, and 1 block.

Pogoy once again led TNT in scoring with 25 points, 4 assists, 4 steals, and 3 rebounds, but the Tropang Giga simply ran out of gas in overtime where they tallied just 6 points.

TNT also missed to steal the game in regulation, with Jayson Castro firing an airball for what would have been his second game-winner in the title duel.

Castro had 17 points and Mikey Williams fired 17 points to go with 5 assists and 4 rebounds.