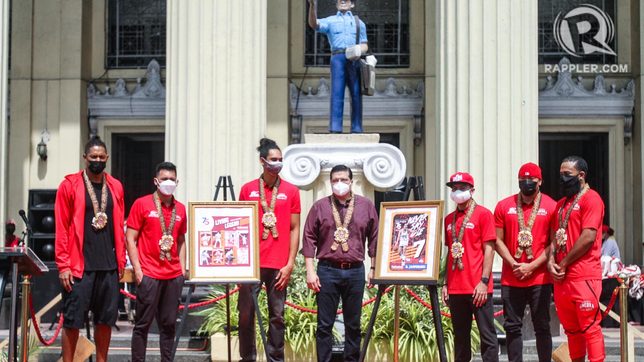 IMMORTALIZED. Dodot Jaworski is joined by current Barangay Ginebra players during the launch of stamps paying tribute to his father and basketball legend Robert Jaworski.

A fitting tribute to the “Living Legend.”

PBA icon Robert “Sonny” Jaworski Sr. has been immortalized by the Philippine Postal Corporation with the release of his own commemorative stamps and souvenir sheets on Saturday, October 16.

The collection is the first of the “Salamat – Pagpupugay sa mga Alamat” series that honors outstanding Filipinos in line with the 75th anniversary of the Philippines’ first stamp.

Jaworski, though, was not able to attend the launch of the stamps in front of the Manila Central Post Office at Liwasang Bonifacio due to poor health.

Representing him in the ceremony was his son Dodot, who was joined by current Barangay Ginebra players LA Tenorio, Mark Caguioa, Stanley Pringle, Japeth Aguilar, Scottie Thompson, and Joe Devance.

Legend Ramon Fernandez, who figured in an intense rivalry with Jaworski, and PBA commissioner Willie Marcial also attended the event.

“The Big J is an icon in more than one sense of the word – so much so that his figure is what embellishes the ‘B’ in the logo of the PBA,” PHLPost said in a statement posted on Facebook.

“The Post Office recognizes Jaworski, Philippine Sports Hall of Fame inductee, for his contributions to the field of Philippine basketball.”

Jaworski, 75, has been suffering from a complicated blood disease wherein he is anemic despite his iron levels being elevated. – Rappler.com