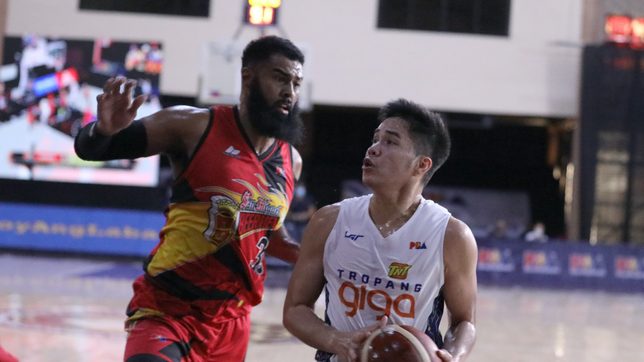 TO THE FINALS. Roger Pogoy saves the best for last as TNT drubs San Miguel in a do-or-die Game 7.

TNT guard Roger Pogoy had enough of getting beaten by San Miguel.

Pogoy saved the best for last and fired 27 points in a 97-79 rout as the Tropang Giga edged the Beermen in seven games to barge into the PBA Philippine Cup finals for the second straight year on Sunday, October 17.

His Game 7 scoring output is his highest in the conference after being limited to just 6 points on a 2-of-10 clip in their Game 6 loss.

“In my five years in the PBA, we always lost to San Miguel,” Pogoy said in Filipino. “So I was really motivated and hoped that even just once, even just now, we can redeem ourselves.”

Prior to this season, Pogoy and TNT fell victim to San Miguel in all of the six occasions they met in the playoffs.

In fact, Pogoy suffered his first playoff heartbreak at the hands of the Beermen when the Tropang Giga got the boot in the semifinals of the 2016-2017 Philippine Cup, his first conference with the team.

TNT then made the finals of the 2017 and 2019 Commissioner’s Cup only to fall short of the championship against San Miguel.

Pogoy made sure it would be a different story this time.

Pogoy said he trusted that his offensive game would eventually click as he opted to focus on his defensive assignments against Beermen guards Marcio Lassiter and Terrence Romeo.

True enough, Pogoy helped limit Lassiter to a scoreless outing in Game 7, the first time the San Miguel star failed to score in the conference.

“Coach always tells me not to focus on offense because my defense was the reason he included me in Gilas Pilipinas,” Pogoy said about Chot Reyes.

“I just focused on my defense on Terrence and Marcio. I’m just blessed that my offense also worked.”

Still without a PBA title despite reaching the finals thrice, Pogoy is determined to lead TNT to its first championship in six years as they tangle with Magnolia in a best-of-seven series.

“I’m really happy. Coach always says that what we all want is a chance. If there is a chance, we will grab it.” – Rappler.com