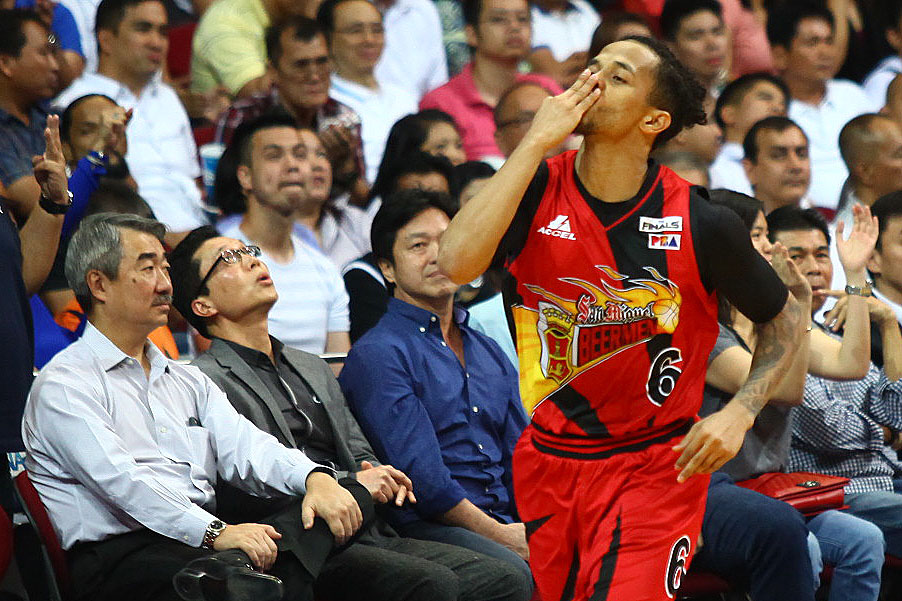 BEER RUNS COLD. Chris Ross and the San Miguel Beermen never quit and were rewarded with a historic series comeback.

MANILA, Philippines (UPDATED) – Destiny was on the side of the San Miguel Beermen Wednesday, February 3 as they completed a historic comeback to frustrate the Alaska Aces once again, 96-89, and win their second straight PBA Philippine Cup title.

The Mall of Asia Arena, for the first time in its young history, stood witness to a classic Game 7 as the Beermen won their 6th Philippine Cup trophy and the franchise's 22nd title. They became the first team in PBA history to claw back from a 0-3 series deficit and win.

The all-Filipino conference title victory is the latest show of dominance from San Miguel, which won 3 of the last 4 championships — all at the expense of Alaska.

Chris Ross was named Finals MVP for his superb performance and leadership throughout the grueling series. He finished with a conference-high 21 points on 4-of-6 3-pointers along with 5 rebounds and 5 assists in Game 7, and averaged 8.4 points, 4.6 rebounds, 4 assists, and 1.7 steals in these finals.

June Mar Fajardo, who came back from a knee injury in Game 5 to bolster his team's inspired fightback,  had a double-double of 21 points and 15 rebounds.

Alaska had Chris Banchero leading the way with 21 points, 16 of which he poured in the fourth quarter. He also had 4 rebounds and 3 assists.

Calvin Abueva posted 16 markers with 10 coming in the final frame on top of 9 boards and 3 dimes. Cyrus Baguio had 10 points and 11 rebounds as the Aces were out-rebounded, 62-50, and had only 13 assists as a team compared to the Beermen's 20.

The Beermen appeared doomed from outset of the series without its reigning back-to-back MVP and this conference's Best Player June Mar Fajardo, who was sidelined up until Game 4 with a knee injury.

The Aces built a daunting 3-0 lead before Fajardo eventually returned in Game 5 and bolstered San Miguel. 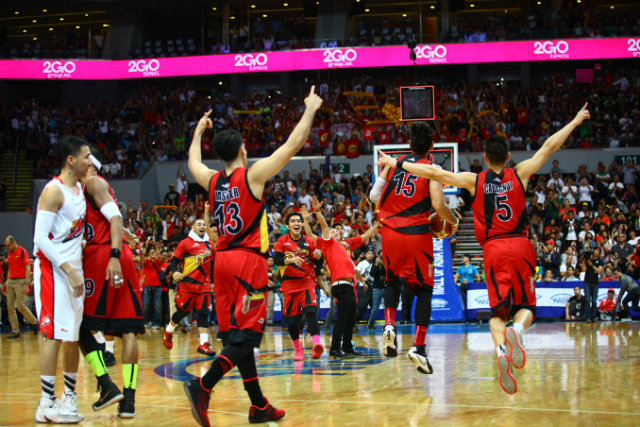 The thrill of victory.

Alaska made an unusual early gamble with 3 straight timeouts in the first second of the game. Coach Alex Compton then made a platoon substitution, leaving only Cyrus Baguio from his starters, but it did not pay off as the Aces found themselves down by 21 points, 68-47, on an Arwind Santos 3-pointer from the top of the key at the 2:02 mark of the third.

Alaska, known for mounting huge comebacks, had one final rally for the road as they unleashed a 17-7 run led by Calvin Abueva to start the fourth period to cut the deficit to 77-72 with 6:51 to go.

But the Beermen would not have a meltdown as Santos drained another triple and Chris Ross scored back-to-back on layups to re-establish an 84-72 advantage with 4:48 left.

Ross hit the dagger triple with 3:03 remaining to put his team comfortably on top 87-75. – Rappler.com