Thompson almost averaged a triple-double as the defending champion Gin Kings stunned the TNT Tropang Giga to remain in the hunt for their fourth Governors’ Cup title in the last five editions.

Behind his averages of 20 points, 12.5 rebounds, and 8.5 assists in the two quarterfinals games, Thompson earned the PBA Press Corps Player of the Week for the period of March 16 to 19 with no contest.

For a guard his size, the do-it-all Thompson delivered lofty numbers of 23 points, 15 rebounds, and 8 assists as Ginebra dragged TNT a do-or-die clash with a 104-92 win.

He then followed it up with 17 points, 10 rebounds, and 9 assists in the rubber match, sparking their early breakaway on the way to a 115-95 rout that sent the Gin Kings to their fifth straight Governors’ Cup semifinals appearance. 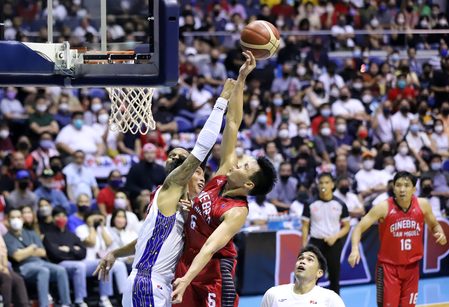 What made his quarterfinals exploits more impressive was Thompson also served as the primary defender of Tropang Giga ace Mikey Williams.

“It was really a matter of stepping up,” Thompson said in Filipino. “My hard work in practice, all the extra work, paid off in this series.”

Ginebra needs Thompson to sustain his fine play as it tangles with NLEX in a best-of-five semifinals affair starting on Wednesday, March 23. – Rappler.com