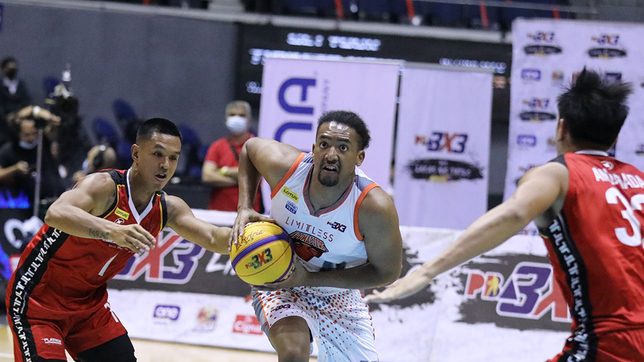 MANILA, Philippines – The Limitless App Masters and Platinum Karaoke emerged as the only teams to book their quarterfinals berths in the sixth and final leg of the maiden PBA 3×3 conference after Day 1 action at the Araneta Coliseum on Monday, December 20.

Limitless, which ruled the fifth leg, remained in the hunt of becoming the first repeat champion in PBA 3×3 history as it finished Pool A at second place with a 3-1 record.

The App Masters toppled the Pioneer Pro Tibay, 21-19, and the Cavitex Braves, 21-16, and earned a win via forfeiture over the Zamboanga Valientes, with their only loss coming at the hands of Pool A leader Platinum, 16-11.

Platinum wrapped up the day with a perfect 3-0 card and will shoot for a sweep of the pool stage when it tangles with the Braves on Tuesday.

Pioneer (2-2) and Cavitex (1-2) will vie for the last knockout round spot up for grabs in Pool A as Zamboanga (0-4) forfeited all of its sixth leg games due to injuries.

The Valientes ended the first conference without a single win over six legs, compiling a lamentable 0-24 record.

Over in Pool C, the Meralco Bolts showcased their depth even without two of their best players as they topped their group with a 2-0 slate.

Despite replacing standouts Tonino Gonzaga and Joseph Sedurifa with RJ Deles and Maclean Sabellina, the Bolts made quick work of Barangay Ginebra, 21-11, and edged Terrafirma, 21-18.

Meanwhile, the San Miguel Beermen also went unbeaten in Pool B with a 2-0 record after pulling off gutsy wins over the Purefoods TJ Titans, 22-16, and NorthPort Batang Pier, 21-16.

NorthPort and the TNT Tropang Giga wound up with identical 1-1 slates, while fourth leg champion Purefoods dropped both of its matches for a 0-2 card, although it still has a chance of reaching the quarterfinals depending on the results on Tuesday.

The top two teams from Pools B and C will advance directly to the knockout stage, while the third-place teams from the two groups will duke it out for the last quarterfinals seat. – Rappler.com