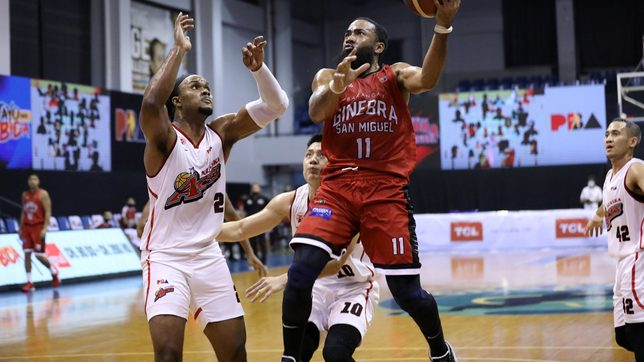 BACK IN ACTION. Barangay Ginebra is among the nine PBA teams which will train in Batangas.

Although Metro Manila eased to GCQ, it is still under a “heightened restrictions” status, forbidding the opening of indoor sports gyms.

“Scrimmages are not permitted within NCR Plus,” PBA commissioner Willie Marcial said in Filipino on Wednesday, May 19 after clarifying with the IATF and Games and Amusements Board.

“We have been approved to train in GCQ areas, but not in areas with heightened restrictions.”

Afterwards, Marcial said some of those PBA teams will move to other Batangas municipalities like Lipa and San Jose once they get the approval of the respective local government units.

The three teams under the MVP Group, meanwhile, will train elsewhere.

Meralco and TNT will set up camp in Ilocos Norte, while NLEX will practice in Pampanga, Marcial said.

Despite the restrictions in Metro Manila, Marcial said the PBA is still on schedule to launch its delayed 46th season in June and implement a two-conference format.

Marcial said the PBA has penciled June 25 as date for the season opening, right after the Philippines’ hosting of the final window of the FIBA Asia Cup Qualifiers from June 16 to 20 in Clark, Pampanga. – Rappler.com