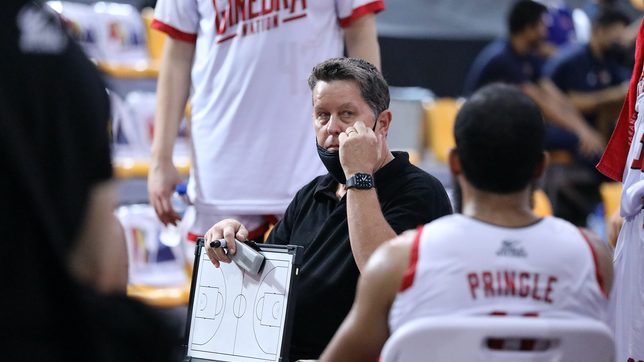 RETURN HOME. After several close calls, Tim Cone and Ginebra pack their bags out of the PBA semi-bubble in Bacolor, Pampanga.

Tim Cone took all the blame as Barangay Ginebra bowed out of the PBA Philippine Cup, failing to live up to the billing in its title-retention bid.

After several close calls, Cone and Ginebra packed their bags out of the semi-bubble in Bacolor, Pampanga following a 71-84 loss to twice-to-beat TNT in the quarterfinals on Wednesday, September 29.

“I can’t find the words to express our sorrow and embarrassment over our performance in the bubble,” Cone wrote on Twitter.

Ruling the all-Filipino conference last season, Ginebra fortified its title defense with the acquisition of former Best Player of the Conference Christian Standhardinger in the offseason.

But Ginebra struggled from the onset, finishing the elimination round with a 4-7 record after a shaky campaign that never saw the defending champions win back-to-back games.

On the brink of elimination, Ginebra even needed to hurdle Phoenix in a one-game playoff to reach the quarterfinals as the No. 8 seed.

But without stars Japeth Aguilar (knee injury) and Scottie Thompson (health and safety protocols), Ginebra finally got the boot, with TNT delivering the death blow to the crowd darlings.

As Ginebra regroups and waits for its key cogs to heal up, Cone – who has won five championships with the storied franchise – promised there would be no repeat of the disappointment.

“All I can say is that it won’t happen again as long as I am the coach,” Cone said. – Rappler.com