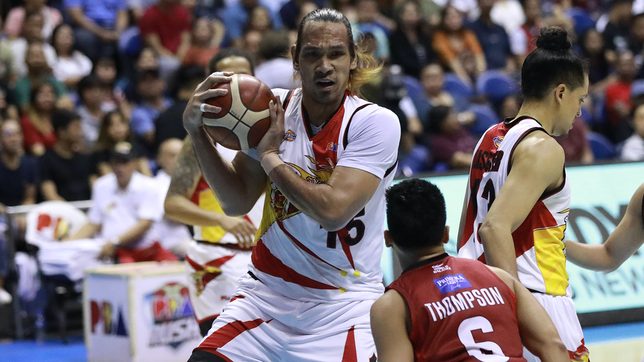 IN SHAPE. Now healthy, June Mar Fajardo is expected to lead the charge as San Miguel tries to reclaim its Philippine Cup throne.

The six-time PBA Most Valuable Player joined San Miguel in its practice at the Batangas City Sports Center on Friday, May 21 – more than a year since he injured his leg while training.

In a video provided by the PBA, Fajardo was seen working on his post moves with San Miguel coaches Boycie Zamar and Jorge Gallent.

Fajardo did not join San Miguel in the PBA bubble in Clark, Pampanga for the Philippine Cup restart last season as he continued to recover from a fractured right shin.

Without the 6-foot-10 big man, San Miguel saw its five-year reign as All-Filipino champions come to a screeching halt.

Now healthy, Fajardo is expected to lead the charge as San Miguel tries to reclaim its Philippine Cup throne, which is now occupied by Barangay Ginebra.

Aside from San Miguel, Rain or Shine, Blackwater, Phoenix, and Alaska took the court in Batangas City on Friday.

Barangay Ginebra, Magnolia, Terrafirma, and NorthPort also resumed their practices in Batangas City a day prior.

Meanwhile, Meralco and TNT have set up their respective training camps in Ilocos Norte. – Rappler.com