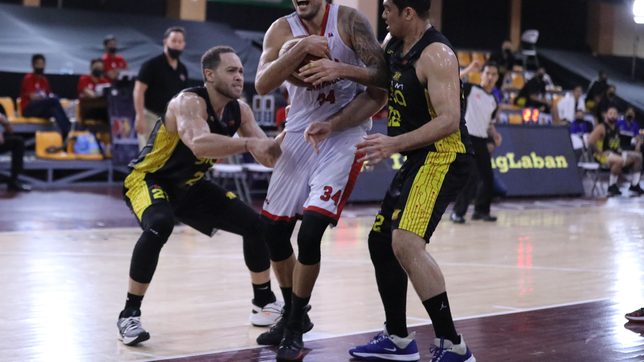 Back in the 2020 PBA Philippine Cup finals, Barangay Ginebra wasted little time in their title quest, and handed the undermanned TNT Tropang Giga a five-game gentleman’s sweep to win their first All-Filipino title in 13 years.

Playing with a hobbled Jayson Castro, and without superstar Ray Parks, TNT struggled against a complete Kings side that banked on a core of Scottie Thompson, Japeth Aguilar, Best Player of the Conference Stanley Pringle, and eventual Finals MVP LA Tenorio.

However, the tables have completely turned since that historic bubble championship nine months ago, and Ginebra’s 2021 title defense was mercifully ended by TNT in one emphatic quarterfinal blowout, 84-71.

This time it was the Gin Kings who were lacking key cogs, namely Thompson and Aguilar, and the Tropang Giga simply took no chances in sending their rivals home for good.

(Coach really pressed for urgency in the pregame earlier. How bad do we want it today? We know that if we give them a chance, it’ll really be a 50-50 game in the second one. So we got through that challenge today. On to the next one.)

“Very tough. First of all, I would like to congratulate coach Tim Cone and his coaching staff. Facing the manpower shortages that they have, they came out with a good game plan. They made it very very difficult,” said the multi-titled tactician.

Reyes also knows that the journey is far from over after the Kings’ dethroning, as either the returning San Miguel dynasty, or the high-octane offense of NorthPort are up ahead in the semifinals.

“We just beat the defending champions, but San Miguel is what, the five-time champion before Ginebra won last conference. We just finished one problem, so it’s on to the next.” – Rappler.com