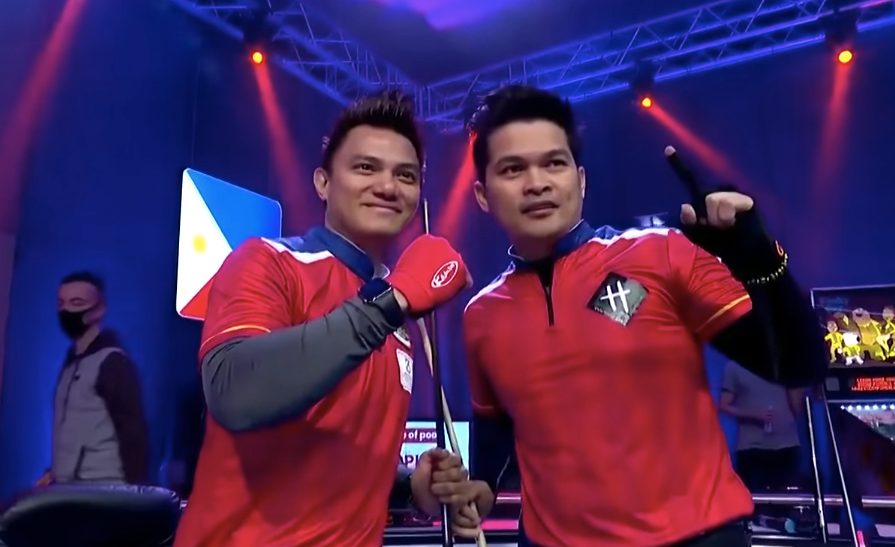 WINNING DUO. Jeff de Luna (left) and Roberto Gomez emerge victorious in the first round of the 2021 World Cup of Pool.

The Philippines’ Jeff de Luna and Roberto Gomez punched their ticket to the second round of the 2021 World Cup of Pool after making quick work of Great Britain B duo Kelly Fisher and Allison Fisher.

De Luna and Gomez cruised to a 7-3 win over the all-female pair on Tuesday, May 11 at the Stadium MK in Milton Keynes, England as only 16 of the 32 participating teams advanced in the knockout tournament.

The Filipinos seized a 5-1 lead in the race-to-seven duel and never surrendered control of the match.

Although the Fisher tandem shaved its deficit to 3-6, De Luna and Gomez eventually wrapped up the victory in the 10th game.

The Filipinos will face Americans Billy Thorpe and Skyler Woodward in the second round late Wednesday, with the winner advancing to the quarterfinals of the event that has a $250,000 prize pool.

De Luna is out for redemption this year after he and former partner Carlo Biado fell short of the grand prize to Austrians Albin Ouschan and Mario He in the finals of the previous edition in 2019.

Ouschan and He, however, will not be able to defend their throne following a 1-7 loss to Slovakians Jabub Koniar and Jaroslav Polach in the first round.

Also, De Luna and Gomez have a chance to make the Philippines the winningest country in World Cup of Pool history.

The Philippines is currently tied with China for most World Cup of Pool titles with three championships apiece.