MANILA, Philippines – Another Zamboanga-based weightlifter’s journey to the Olympics may have just started.

At just 17 years old, Rose Jean Ramos copped a bronze medal in the recent Asian Championships in Manama, Bahrain. Although the event wasn’t an Olympic qualifier, she showed massive potential as she kept pace with the veterans.

“She’ll be another future Olympian. We challenged her to face the seniors in the Asian Championships being the youngest at 17 years old, and she still got a bronze,” Puentevella told Rappler.

“The gold medalist in her division was six years older yet she survived with flying colors. She’ll be ripe for the 2028 Los Angeles Olympics. This is how we build up champions,” he added.

Ramos won a bronze medal in the clean-and-jerk category of the women’s 45-kilogram division, lifting 85 kg, ending up behind Indonesian Siti Nafisatul Hariroh (91kg) and Vietnamese Khong My Phuong (88kg).

A multiple-time junior world champion, Ramos was a mere kilogram short of a bronze medal in the snatch, lifting 67 kg against India’s Harshada Garud, who was able to clear 68 kg.

Unlike the Olympics, medals in the Asian Championships are awarded in the three categories, including the total lift.

The country’s top lifters were a no-show in the tournament as they decided to focus their effort towards the World Weightlifting Championships this December in Bogota, Colombia.

Olympic gold medalist Hidilyn Diaz – who has inspired many of her fellow Zamboanguenos to take up the sport – will be leading a nine-person delegation in the prestigious meet, as they look to book an early ticket to the 2024 Paris Games. 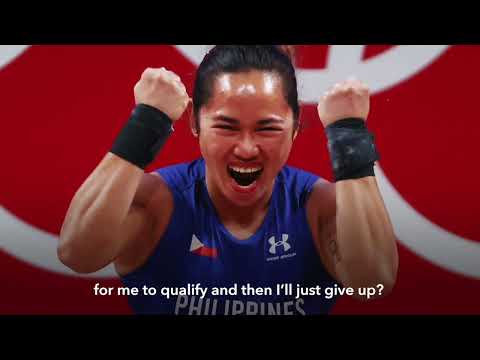