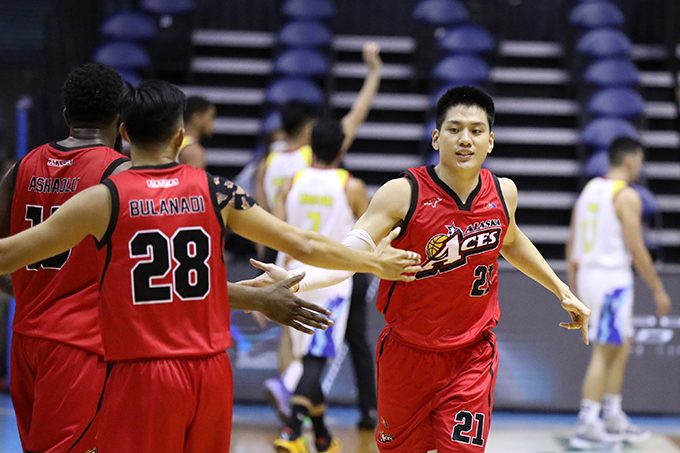 FAREWELL TOUR. Alaska guns for its 15th title in franchise history in its final PBA season.

MANILA, Philippines – Alaska announcing it will depart the PBA after nearly four decades marked an eventful week of sports that also saw the Beijing Winter Olympics come to a close.

Here are the photos of the top sports moments of the past week:

The PBA is set to bid goodbye to one of its most storied teams as Alaska announced on Wednesday, February 16, that it will retire from the league after nearly four decades.

Aces team owner Fred Uytengsu, though, vowed that his team will ride into the sunset with a bang as they gun for their 15th championship in franchise history.

So far, Alaska has been unbeaten in the PBA Governors’ Cup since the shocking development, claiming wins over Rain or Shine and Terrafirma.

The Los Angeles Rams came through in the clutch to claim the coveted Vince Lombardi trophy as they edged the Cincinnati Bengals, 23-20, in the Super Bowl on Monday, February 14 (Manila time).

Quarterback Matthew Stafford connected with Cooper Kupp for the game-winning touchdown with 1:25 remaining to propel the host Rams to their second Super Bowl title in franchise history.

It took 22 years for the Rams to once again emerge as champions since they bagged their maiden title in 2000 when they were still based in St. Louis.

Filipino-American skier Asa Miller concluded his Beijing Winter Olympics campaign with another DNF (did not finish) as he crashed in the men’s slalom on Wednesday.

Miller, who also submitted a DNF in the men’s giant slalom last week, skied for just 35 seconds after his foot got entangled with a pole.

The Philippines’ lone bet in Beijing, Miller vowed to come back stronger as he sets his eyes on the 2026 Milano and Cortina Winter Games, which would be his third Olympic stint.

“I understand that not being vaccinated today, I am unable to travel to most of the tournaments at the moment,” said the Serbian star, clarifying he is not against inoculation. “Yes, that is the price that I’m willing to pay.”

Djokovic missed out on a chance to win a record 21st Grand Slam title in the Australian Open in January after he got deported following the cancellation of his visa over his unvaccinated status.

TNT stamped its class in the second PBA 3×3 conference after clinching the Leg 1 championship with a gritty 21-19 win over Meralco in the finals on Sunday, February 20.

Almond Vosotros finished with 10 points and drained the game-winning two-pointer as the Tropang Giga completed their unbeaten title romp to take home the top prize of P100,000.

Controversy shrouded the Olympic women’s figure skating final as Russians Kamila Valieva and Alexandra Trusova broke down in tears after both fell short of the gold medal on Thursday, February 17.

Hoping that a gold would overshadow the doping scandal that marred her Beijing stint, tournament favorite Valieva instead delivered a lackluster performance and sobbed at the end of her routine on the way to fourth place.

In an ugly turn of events, Valieva was confronted by her coach Eteri Tutberidze, who demanded answers following her uncharacteristic showing.

Meanwhile, Trusova threw a temper tantrum after settling for silver behind compatriot Anna Shcherbakova, saying she hates the sport and will never skate again. – Rappler.com