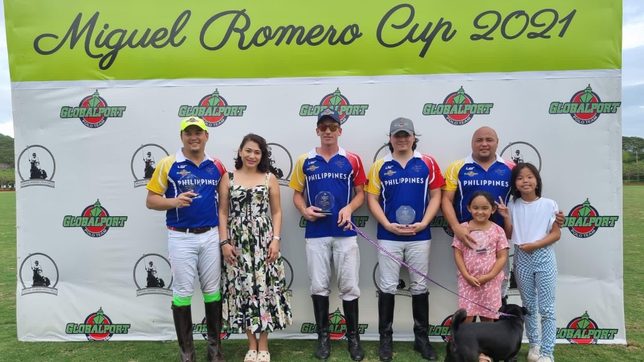 Facebook Twitter Copy URL
Copied
GlobalPort-Philippines delivers an impressive victory over a favored Argentina squad, firing 8 of its 10 goals from the field

MANILA, Philippines – GlobalPort-Philippine team used its chemistry to its advantage as it rampaged early to produce a stunning 10-9 win over a fancied team from Argentina in the Miguel Lorenzo Romero Cup held recently in Calatagan, Batangas.

“It was unbelievable beating the Argentineans,” said Romero who scored a crucial goal late in the game that helped GlobalPort repel Argentina’s determined comeback. “We made a good start because of the team’s chemistry.”

Behind Garcia’s attacking flair, GlobalPort raced to a commanding 6-2 lead to the cheers of a small but highly appreciative crowd that enjoyed the hospitality of the host organization.

GlobalPort’s lead, however, dwindled after the half as the Argentineans intensified their attack to pull to within 9-8.

But Romero and Garcia – along with Adrian Garcia and Jake Gordon – refused to be intimidated with Anthony Garcia sealing the deal with his sixth goal with still two minutes.

Though Argentina made another goal, time was not on its side as GlobalPort rotated the ball with razor-sharp precision to deny Argentina from tying the game.

What made GlobalPort’s victory more impressive was that eight of its goals were from the field while the two others were scored the foul line courtesy of Adrian Garcia.

The tournament was the first to be held at the Miguel Lorenzo Romero field since the 2019 SEA Games that saw the Romero- and Garcia-led team secure a bronze medal in the event that lured several rich and powerful from the region. – Rappler.com