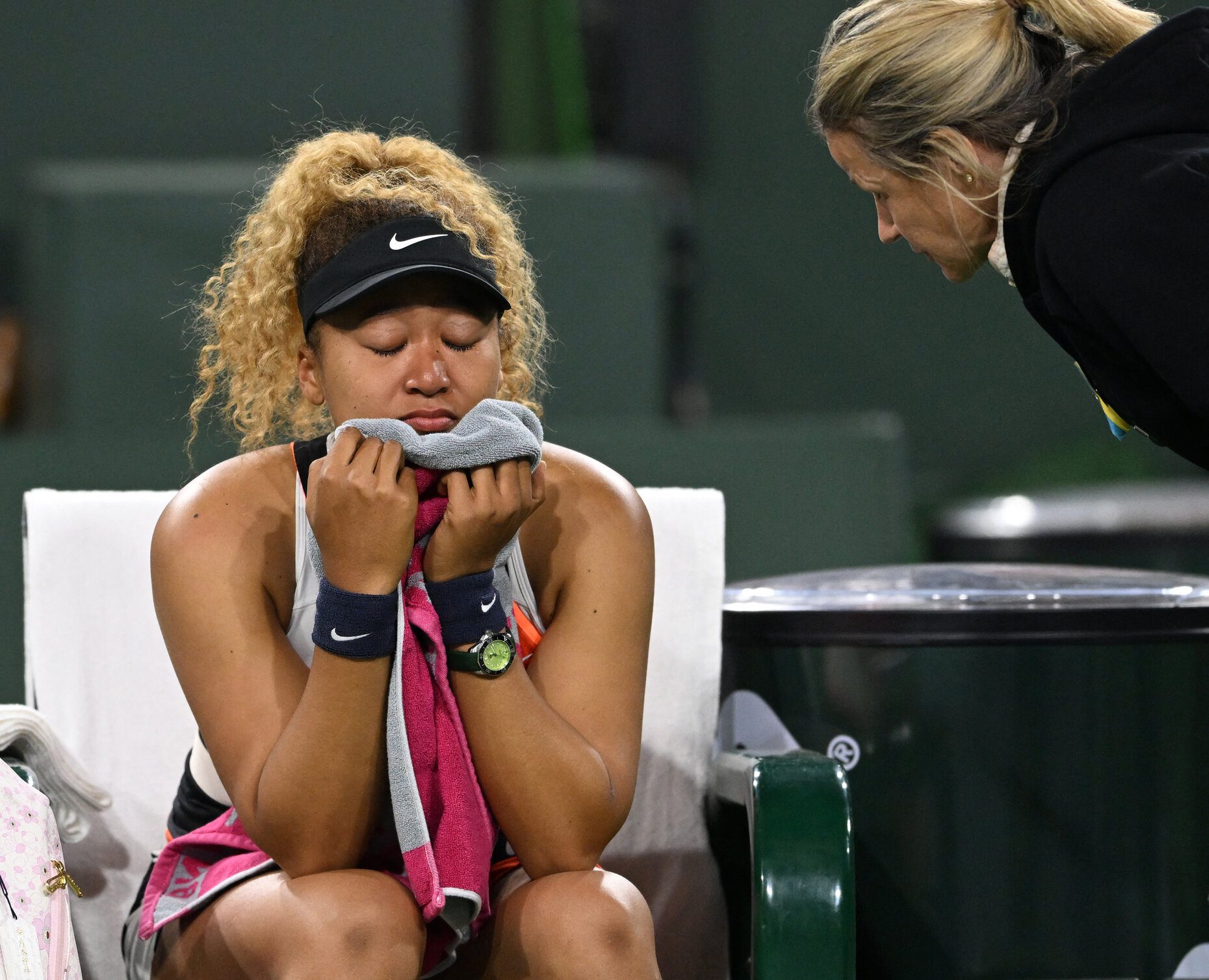 MENTAL CHALLENGE. Naomi Osaka wipes her face as she talks to referee Claire Wood after a spectator disrupted play by yelling at the tennis superstar.

Facebook Twitter Copy URL
Copied
After being broken in the first game, a fan shouts ‘Naomi, you suck’ as the former world No. 1 Osaka wipes away tears

INDIAN WELLS, USA – Naomi Osaka was rattled by a heckler early in her second round match against Veronika Kudermetova and never recovered as she fell 6-0, 6-4 at Indian Wells on Saturday, March 12 (Sunday, March 13, Manila time).

After being broken in the first game, a fan shouted “Naomi, you suck” and Osaka could later be seen wiping away tears.

After the match, the event’s 2018 champion addressed the crowd on center court, saying the incident reminded her of when Venus and Serena Williams were booed at the tournament in 2001.

“I’ve been heckled before and it didn’t really bother me,” Osaka said while holding back tears.

“But being heckled here. I’ve watched video of Venus and Serena get heckled here and if you’ve never watched it, you should watch it. And I don’t know why, but it went into my head and got replayed a lot.”

“I just want to say thank you and congratulations,” she concluded.

Osaka has been open about her struggles with mental wellness in the past and took a break from the sport following her upset loss at last year’s US Open. She said she was in a great place emotionally coming into the tournament.

Kudermetova stayed locked in despite the drama and continued her hot start to the year, outplaying the four-time Grand Slam champion even when she regrouped in the second set.

“It was a really tough match for me against Naomi,” she said.

“She is a great player, she’s a good fighter, and I’m really happy about my performance today. I was so focused and I’m so happy to be here and play in front of you guys.”

After cruising through the first set in 35 minutes, the Spaniard struggled to cope with a more aggressive approach from the 21-year-old, who stormed through the second.

Nadal’s normally solid serve let him down in the third and he committed his seventh double fault to fall two breaks down in front of a stunned crowd under blue skies in the Southern California desert before fighting back to force a tiebreak.

The veteran was then much more composed and sealed the win when Korda’s backhand landed wide.

“Everyone knows this is my favorite place to play and it is amazing to play in front of all you guys,” Nadal, who has won the tournament three times, told the supportive crowd on Stadium One.

“I feel very lucky today to be through. Sebastian was playing some fantastic tennis. He had his chances, but that’s tennis.”

The loss will sting for Korda, who grew up idolizing the 21-time Grand Slam champion and even named his cat after him.

With the win, Nadal is now undefeated in 16 matches this year.

Before his match, Nadal announced that he would not compete at the Miami Open, which starts later this month.

Newly crowned world No. 1 Daniil Medvedev dispatched Tomas Machac 6-3, 6-2 to cruise into the third round.

Medvedev’s powerful serve and almost impenetrable defense proved too much for the Czech qualifier to handle on a hot day in the Southern California desert.

The Russian received a warm welcome from the crowd on Stadium One when he was introduced as the world’s top men’s player after the match.

“This is the first time I have heard this and people clapped so thanks a lot for the nice welcome,” Medvedev said.

The 26-year-old US Open champion is seeking his first win at the Masters 1000 tournament.

World No. 3 Aryna Sabalenka, though, suffered a shock loss in her first match, falling to Italian Jasmine Paolini, 2-6, 6-3, 6-3, in the second round.

The hard-hitting Belarusian’s serve was broken four times and she committed 10 double faults on a hot day in the Southern California desert.

Diminutive world No. 46 Paolini said she was as surprised as anyone to come away with her first win over a top 10 opponent.

“I’m so happy. I didn’t expect this moment,” she said.

“I’m just happy to be here in the third round. I think I played an amazing match. The crowd was amazing. I enjoyed it very much.”

Sabalenka was a favorite to win the event after world No. 1 Ash Barty and world No. 2 Barbora Krejcikova withdrew ahead of the start of the WTA 1000 tournament.

Sabalenka follows Karolina Pliskova and Garbine Muguruza out the door after both top 10 players lost on Friday.

Paula Badosa also kicked off her title defense with a 6-2, 7-6(4) win over Tereza Martincova.

The Spaniard had never taken a set off the Czech in their three previous meetings and let out an emphatic scream and pumped her fists after she executed a perfect backhand volley winner on match point.

“I think the difference was I played against her one-and-a-half years ago and I’ve improved a lot in so many ways,” Badosa said.

“Mentally, but physically as well because I think it was a very physical match. I could see how much I improved today.” – Rappler.com