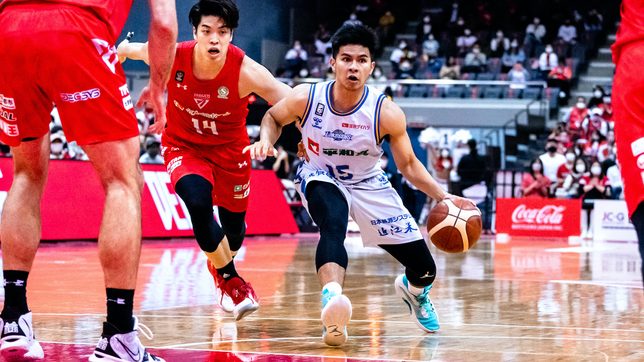 FINEST GAME. Kiefer Ravena proves his worth for the Shiga Lakestars.

The latest weekend playdate of the Japanese B. League featured Kiefer Ravena transforming into a star in the eyes of Japanese fans and Javi Gomez de Liaño finally suiting up for the Ibaraki Robots.

There were contrasting results for the other Filipino reinforcements in terms of their individual output and their respective team’s performance.

Here are the highlights of the latest round of action in the B. League:

The Phenom outshines B. League MVP

A lot of hype accompanied the games between the Shiga Lakestars and the defending champion Chiba Jets as it pitted Kiefer Ravena against one of the biggest names in Japanese basketball, Yuki Togashi.

Togashi is the 2019 B. League MVP who saw action for the Texas Legend in the NBA D-League in 2014-15. Going into the weekend, Togashi was the second-leading Asian scorer in the B. League with 16.5 points and one of the top playmakers with 5.6 assists a game.

The Chiba Jets won the war versus the Shiga Lakestars. Ravena won via mile his personal battle versus Togashi.

In their Saturday encounter, the Lakestars’ late rally fell short as they bowed to the Jets, 88-99. Togashi was limited to just 10 points on 4-of-12 shooting. He also committed 4 turnovers, although he dished out 8 assists. Ravena proved to be the better court general as he dropped 14 points and issued 9 assists plus 2 steals.

The Lakestars were once again upended by the Jets on Sunday, 78-81. Ravena and the Shiga backcourt hounded and banged up Togashi the entire 23 minutes he was on the floor.

Togashi ended up scoreless, only the first time since January of the previous B. League season that the Japanese ace failed to buy a bucket. His only contributions were 4 rebounds, 2 assists, and 1 steal. Ravena, on the other hand, played his best game in Japan as he exploded for 27 points. He was razor-sharp from beyond the arc as he went 4-of-5 from three. Ravena also had 10 assists and 3 steals as he totally outplayed Togashi.

The Lakestars, though, saw their record fall to 6-5, pushing Shiga outside of the top 10 in the standings.

Incremental steps of progress for Ray

There was always a belief that the Nagoya Diamond Dolphins were a better team than what their early record indicated. After all, Nagoya was the last team that missed the last playoff bus last season. They then started this season with injuries to two of their four imports.

Ray Parks Jr. has been instrumental in the Diamond Dolphins’ march back to playoff contention. Parks was the one of only two Filipino reinforcements to pick up a win this weekend.

Nagoya split its two games against the Gunma Crane Thunders, where Parks was at his most efficient as he normed 10 points and 4.5 boards in less than 20 minutes of action.

Parks and four other Nagoya players are scoring in double figures, plus two others average 8 points per outing. This balanced offense has helped the Diamond Dolphins win six out of their last eight games to offset their 0-3 start to the season. Parks has been a solid contributor for the surging Diamond Dolphins with his averages of 10.7 points, 3.6 rebounds, and 1.2 steals.

Coming off his worst showing of the season last Saturday where he put up a mere 4 points and 3 boards in a game which saw the SanEn NeoPhoenix blow an 18-point lead to still lose to the Shibuya Sun Rockers, Thirdy Ravena had a bounce-back outing on Sunday. After a scoreless first half, Ravena poured in 13 points in the second half. His efforts, though still were not enough to prevent SanEn from suffering its third straight loss.

Ravena has been one of the most consistent among the Filipino imports. He has scored in double figures in 8 out of the 11 games and is averaging 12 points per game. He is also grabbing 4.1 rebounds. His squad, however, remains at the bottom four in the standings with a 3-8 record.

One of the few bright spots in Toyama’s otherwise gloomy season has been the solid play of Dwight Ramos.

Against one of the league leaders in the Kawasaki Brave Thunder, Ramos displayed his all-around prowess with 13 points, 4 defensive rebounds, 7 assists, and 2 steals as he sparked an endgame comeback last Saturday which almost led to an upset. He followed it up with another steady performance on Sunday when he chipped in 8 points, 7 rebounds, and 2 assists.

Toyama, however, remains at last place in the standings, a monumental collapse from relevance by a squad which just last season made the B. League playoffs.

Kobe Paras is in a slump. So is his team, the Niigata Albirex, which was defeated twice this weekend by the Ryukyu Golden Kings. Niigata has now lost eight straight games and is tied for second-to-last in the standings.

Paras scored just an average of 6 points on 25.85% shooting in Niigata’s two games this weekend. These are way below his season average of 12.3 points on a 38% clip from the floor.

After registering double figures in each of his first six games and placing among the top 25 scoring leaders in the league with his average of 16.3 points, Paras’ hot hands have since cooled down. He has scored below 10 points in four of his last five games and his scoring average has declined to just 7.4 per game.

Javi and Juan get floor time

The Gomez de Liaños finally saw in action, but there were little similarities in their individual and team results.

Javi made his long-awaited debut with the Ibaraki Robots last Saturday. His maiden appearance, however, was spoiled by the Osaka Evessa, which trumped Ibaraki, 72-90. Javi was fielded in for 13 minutes and contributed 3 points on 1-of-4 shooting.

Ibaraki won the return bout versus Osaka on Sunday, 81-72, in a game where Javi did not play. With the win, the Robots improved to 2-9 and avoided a tie with Toyama for last place in the standings.

The consolation for the Earthfriends was Juan’s heady plays, which could spell better days ahead for his squad.

In their 76-80 defeat to Fukushima last Saturday, Juan put on his best showing in B. League Division II action. The former Gilas stalwart shot 6-of-11 from the field to end up with 15 points. He also had 9 assists, 5 rebounds, and 3 steals as he repaid the starting role coach Hugo Lopez entrusted him with.

Juan sustained his sharp form by tallying 13 points, 4 assists, and 4 boards on Sunday even as his squad dropped another close one to Fukushima, 73-77.

The Earthfriends Tokyo Z remain the only winless team in Division 2 after 10 games. – Rappler.com