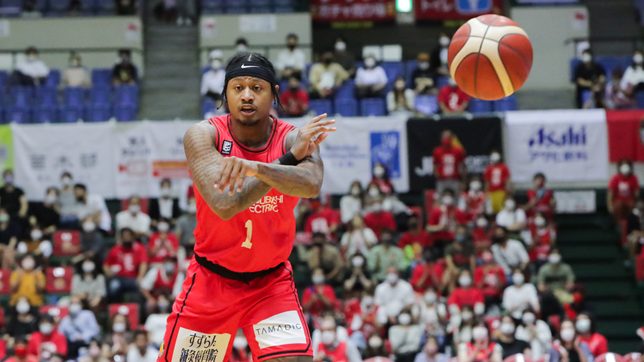 ALL-AROUND. Ray Parks’ versatility has been on display in Japan.

Facebook Twitter Copy URL
Copied
‘I can imagine what it must have been like for my dad when he first played as an import in the Philippines,’ says Ray Parks, noting that playing overseas can be tough

MANILA, Philippines – It does not seem long ago that Ray Parks Jr. was touted by local sports media as one of the brightest teenage Filipino prospects who could make it big in the international arena and possibly even the NBA.

Today, he is a veteran who has played in four professional leagues in various countries.

“I’m turning 29 years old early next year. Life is fast, man,” he said in an interview with Rappler.

He has been in Japan for three months now. After missing the first two games of the season due to an injury, Parks was slowly incorporated into the scheme of things by Nagoya Diamond Dolphins coach Shawn Dennis. Parks responded by displaying his adaptability and his willingness to grow into the role assigned to him.

After scoring just a total of 3 points in his first two games where he was barely fielded in, he has gone on to average 10.8 points, 4 rebounds, and 1 steal in 12 outings.

Right before the Japan B. League went on a three-week hiatus to give way to the FIBA World Cup qualifiers, Parks played his best game in a Nagoya jersey as he dropped 23 points built on 5 triples and grabbed 7 boards to spark the Diamond Dolphins to a huge 101-75 victory over the SeaHorses Mikawa.

Nagoya’s coaching staff were well aware that Parks could rack up the points. What came as a surprise for them, they admitted, was that Parks is also a lockdown defender with his length, athleticism, and ability to read offensive players.

“I am asked to defend the opposing team’s best perimeter player and I want to live up to that task,” shared Parks. “I always make the effort to be a threat on both ends of the floor.”

This versatility has always been on display from his collegiate playing days until he made the transition to the NBA D-League, the ASEAN Basketball League, the national team, and the PBA, but his scoring prowess may have taken away the spotlight from his inherent ability to be a pesky and tenacious defender.

He noted the challenge he faces every game in Japan of having to shadow and shut down some of the best local scorers and even imports in the league.

“They play more of the team game here. In the Philippines, the difficulty is in defending really talented one-on-one players. In Japan, you have to go through a lot of picks, staggers, and pin downs just to keep in step with your man.”

The Diamond Dolphins is one of the hottest teams in the B. League as Parks’ splendid form has been instrumental in Nagoya winning eight of its last 11 games.

The squad has climbed to fifth place in the West with an 8-6 record even as it has been playing mostly with just two Western imports with former Indiana Pacer center Shayne Whittington suiting up in just three games due to an injury.

Parks is fourth in the team in scoring behind imports Scott Eatherton and Cody Clark and Japan national team point guard Takumi Saito.

With the announcement this week that former Alaska import Rob Dozier will be coming in to join Nagoya, coach Dennis’ squad becomes even more potent. Depth is something critical to the success thus far of the Diamond Dolphins.

“We like to play at a high pace and get up and down the floor every chance we get,” said Parks. “It is important that we are able to get players in and out quickly especially with the back-to-back turnaround on weekends and sometimes with three games scheduled per week.”

Aside from Saito, two other Japan national team players are key components of the Diamond Dolphins. These are 6-foot-6 bullstrong power forward Tenketsu Harimoto who is scoring close to 8 points  per ballgame, and shooter Yutaro Suda who is averaging 8.3 points.

Parks acknowledges his team has the potential to go deep in the playoffs. But he also is aware they face a long season that entails a great many sacrifices from him and the rest of the team. The pressure has dawned on him, but it is something he welcomes and embraces.

“The life of an import is tough,” he said, recalling his late father Bobby Parks, a seven-time PBA Best Import. “I can imagine what it must have been like for my dad when he first played as an import in the Philippines.”

Even during the FIBA window break, Parks has been putting in the work as he gets his body conditioned to the grueling 60-game schedule.

“Our regular days begin at 8-8:30 to warm up for weight training in the gym at 9 am. Then I have individual training at 11 am,” said Parks, describing what a typical day in Nagoya is like for him.

“I have some rehab for strengthening at 1 pm then team meeting at 1:30. From 2-4 pm, we have team practice. After that, I put up shots, then I get into the hot and cold tub. By the time I get home, it’s around 6 or 7. So I just have dinner, watch a bit of Netflix, then prepare again for the next day.”

People in Nagoya are beginning to recognize him when he is out, but what always is a thrill for him is when Filipinos see him and talk to him.

“A lot of them still get surprised when I talk to them in Tagalog. But they are even more surprised when they hear me talk a bit of Japanese,” he said with a bit of laughter.

Amid the grind, the packed daily routine, and the loneliness of being away from loved ones, Parks still manages to find moments of introspection which have led to self-realizations born out of the opportunity afforded him of being alone in a foreign land.

“It feels good being able to detach myself from the game from time to time,” he said. “One thing I love about the Philippines is that people love basketball so much. Like when I step out of the house, there is always someone who will say, ‘bawi tayo next time,’ or someone who will talk about the game.”

“But there are times that I also want to detach from the game and just be myself. Here, if I want to detach myself from basketball and just find life outside of the court, I can do that.”

These spaces of anonymity, Parks said, have allowed him to discover other layers of himself and have helped him gain more balance in life. In the process, these have helped him grow mentally and spiritually.

Being in Japan is a privilege that Parks is grateful for every single day. “I feel blessed to be in a position to carry our flag and represent the country. I am able to play the game I love. This still is a new chapter in my life. I am definitely enjoying this.” – Rappler.com