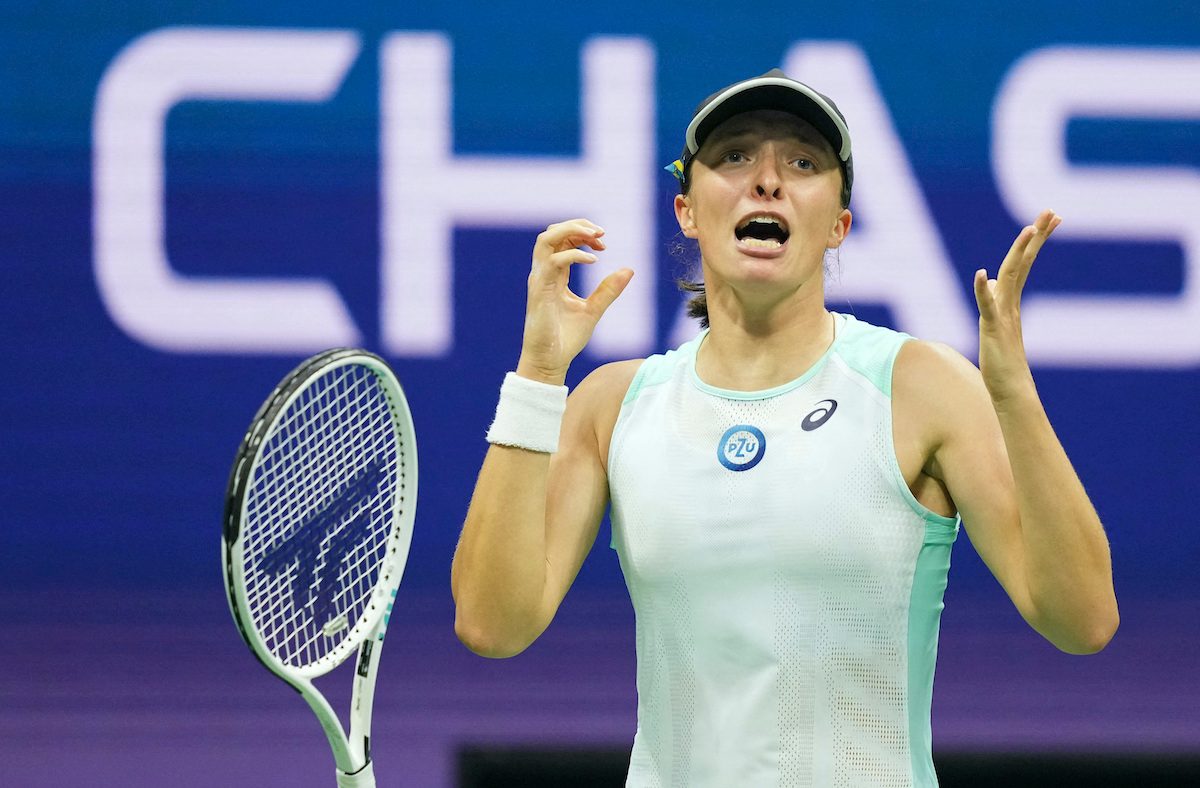 BREAKTHROUGH. Iga Swiatek reaches the US Open final for the first time.

Facebook Twitter Copy URL
Copied
World No. 1 Iga Swiatek guns for her third Grand Slam title and first in the US Open after seeing off Aryna Sabalenka in the semifinals

NEW YORK, USA – World No. 1 Iga Swiatek rallied from a set down to beat Aryna Sabalenka, 3-6, 6-1, 6-4, and reach her first US Open final, where she will meet Ons Jabeur on Saturday, September 10, for the trophy.

After a sluggish start, the Pole came alive in the second set and overcame an early break in the decider by winning the final four games to see off the powerful Belarusian.

“Against Aryna, you have to have the energy to push her back and be able to play those fast balls,” Swiatek said in an on-court interview.

“In the first set I lacked a little bit of that so I needed to get it together. Drink some energy shots and just kind of go with it. I’m pretty glad that I did that.”

A game-changing bathroom break after the first set also helped.

“I kind of needed to go. For sure I felt lighter. I’m sorry, that’s disgusting,” she said with a laugh.

“I just tried to use that time and think about what to change. I remember that when I was younger, all I would do in the bathroom between sets when I lost was cry. This time I was able to problem solve.”

With the win, Swiatek became the first Polish woman to ever reach the US Open final, where she will face Jabeur, who became the first North African woman of the Open era to do the same earlier in the day.

Both Swiatek and Sabalenka came out tense under the lights on Thursday, but the sixth seed settled in first, finding a service rhythm and dialing in her forehand against Swiatek, who has struggled at times in the past against big hitters.

Sabalenka consolidated a break with an ace for 4-2 and captured the first set when she snuck to the net behind a huge forehand and sent a volley past the charging Swiatek.

But Swiatek, who was forced to battle back from a set down in her fourth-round match against Jule Niemeier, raised her level in the second, serving much better and breaking Sabalenka three times to level the contest.

Sabalenka responded early in the third, her confidence growing when her blistering backhand knocked her opponent backwards and onto the court as she raced out to a 2-0 lead.

But the feisty Swiatek refused to give in, breaking back with a backhand winner to level at 4-4 and advanced to her first final in Flushing Meadows when Sabalenka’s backhand landed in the net.

Sabalenka, who lost all of her slam matches this year after being up a set and who was unable to compete at Wimbledon after organizers banned players from Russia and Belarus due to Moscow’s invasion of Ukraine, said she was proud of her fight.

“Going here to US Open, didn’t really expect any wins,” she told reporters.

“But I made it. I really start playing better and I feel it and I just have to keep going, keep trying, keep fighting, keep doing my best. I think things will go better.”

The two-time French Open champion Swiatek will gun for her third Grand Slam title when she faces dynamic Tunisian Jabeur, who cruised to her semifinal with a straight sets win over Caroline Garcia.

Swiatek and Jabeur are 2-2 in their four career meetings.

“It’s always tough and I’m pretty sure it’s going to be physical,” Swiatek said of Jabeur.

“She has such good hands, she is solid on the baseline and when she’s going in so I have to be careful.”

“I don’t know what’s going to happen. Right now, I’m just going to enjoy being in the final.” – Rappler.com