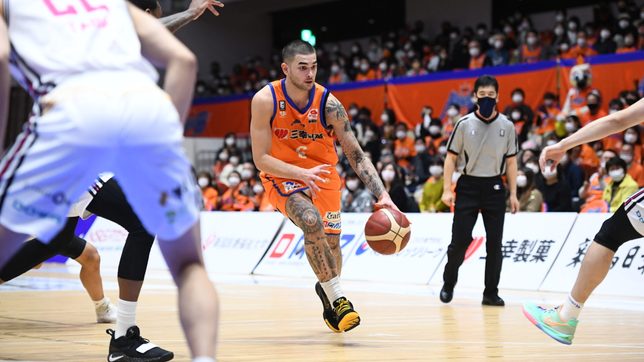 SLUMP. Kobe Paras only tallies 7 points off a 3-of-12 shooting.

The Niigata Albirex BB’s run of futility continued in the Japan B. League as the Hiroshima Dragonflies secured an 88-76 road win on Saturday, December 18.

Kobe Paras again fell short in his team’s 17th straight loss despite his return to the starting lineup as he continued his own slump with just 7 points on 3-of-12 shooting in 27 minutes.

Like many other games before, the Albirex kept it competitive in the first half and trailed by just four, 36-40, very early in the 3rd quarter.

But they quickly ran out of gas on offense from that point onwards as Hiroshima left them in the dust with a huge 22-5 run, capped by an Isaiah Murphy triple at the 3:46 mark for the game-high 21-point lead, 62-41.

Although Niigata mustered a late 14-1 attack to slice a 19-point deficit to just six, 71-77, with 2:21 left in regulation, it was just too little, too late for the weary Albirex as the Dragonflies held on for the win.

Top Niigata reinforcement Rosco Allen, meanwhile, led yet another losing effort with a game-high 16 points on 4-of-12 shooting, backstopped by Tshilidzi Nephawe’s 12-marker, 11-rebound double-double off the bench.

The Albirex now turn their attention to a possible skid-stopping win in the Sunday, December 19 rematch at 2:05 pm, Manila time.

Speaking of skids, the Shinshu Brave Warriors likewise continued their slide down the standings as the Shimane Susanoo Magic took care of business at home with a 91-71 blowout.

Fil-Jap big man Matthew Aquino made his second straight start in Shinshu’s sixth consecutive loss but only tallied 1 rebound with 4 fouls in 17 minutes as the Warriors settled for a 9-11 record.

The Gilas prospect squeezed in 2 rebounds and 1 assist in 7 minutes off the bench as Ibaraki fell to 3-17 for the season.

The 6-foot-8 project big man only played 4 minutes in the 45-point loss and only had 2 turnovers to show for it.

Finally, the Earthfriends Tokyo Z eked out an 81-77 win – their second in four games en route to a 4-18 record over the Bambitious Nara.

However, Gilas guard Juan Gomez de Liano was not around to celebrate with his teammates as he was recently deactivated likely due to team-enforced health protocols last December 9. – Rappler.com