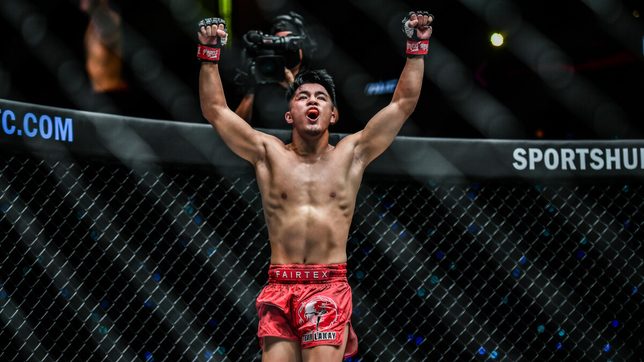 MANILA, Philippines – It’s a tale of two halves for Team Lakay as its two debutants put up impressive finishes while two others came up short in ONE Championship: Winter Warriors II on Friday, December 17 at Singapore Indoor Stadium.

“The Machine” Jhanlo Mark Sangiao had a rousing debut and opened the night for the Benguet-based stable with a Round 1 submission victory against Indonesian veteran Paul “The Great King” Lumihi (7-6).

Jhanlo, the son of Team Lakay mentor Mark Sangiao, looked comfortable inside the cage and immediately pounded Lumihi with heavy combinations before taking the fight to the ground.

The 19-year-old Filipino fighter then quickly took over with his grappling skills and finished the opening bout with a slick rear-naked choke.

“This is my dream since I was a kid,” Sangiao said after the fight.

Meanwhile, Stephen “The Sniper” Loman (15-2) introduced himself to the world in spectacular fashion as he edged No. 3 bantamweight fighter Yusup “Maestro” Saadulaev (20-6) with a vicious round 1 knockout.

The headhunting paid off for Loman, who caught Saadulaev with a couple of short punches early before connecting another powerful left hand that rattled the submission artist.

Saadulaev, though, tried to match Loman’s intensity with his strikes and even managed to tag the Filipino with own his left hand. But Loman’s well-timed left overhand punch shut the lights out for the Russian veteran with less than a minute left in the opening round.

“Very happy I got the knockout win,” Loman said. “I prepared a lot for this fight. I did my best and it paid off.”

Loman was originally scheduled to make his debut against the hard-hitter John Lineker back in April but was forced to sit out due to COVID-19.

Team Lakay could not end the night on a high note as headliners Danny Kingad and Kevin Belingon dropped their respective bouts.

The No. 2 flyweight contender Kingad (14-3) got completely outclassed on the ground and absorbed a decision loss against the fourth-ranked Kairat “The Kazakh” Akhmetov (25-2).

Akhmetov did not waste any time and immediately took the fight to the ground where he controlled Kingad from start to finish.

More of the same happened in the second round as Akhmetov continued to dominate the match with his wrestling. Kingad, though, momentarily took control in the third round and even tagged the Kazakh with his right hand.

But Akhmetov wisely capitalized on the clinch and caught Kingad’s knee to bring the fight back to the floor with a minute left on the clock.

This was Kingad’s first bout since January 2020. His last bout ended with a decision win against Wei Xie. Akhmetov, on the other hand, won his last four fights.

Meanwhile, the slump continues for former world champion Kevin “The Silencer” Belingon (20-9) as he folded in the second round against Korean fighter Kwon Won Il (10-3).

Belingon engaged in a close opening round and answered the pressure from Kwon with his flurry of punches and takedown attempts. The 34-year-old veteran absorbed the flying knee from Kwon before landing a solid overhand right.

Both fighters came out swinging in the first five minutes but Kwon came out as the fresher fighter in the second round compared to the gassed Belingon.

The former champ continued to move forward to close the gap against the taller Kwon, but the Korean found a small window and punished Belingon with a nasty body shot that ended the night for the veteran.

With his loss, Belingon now dropped his last four fights, which includes his back-to-back loss against reigning champion Bibiano Morales.