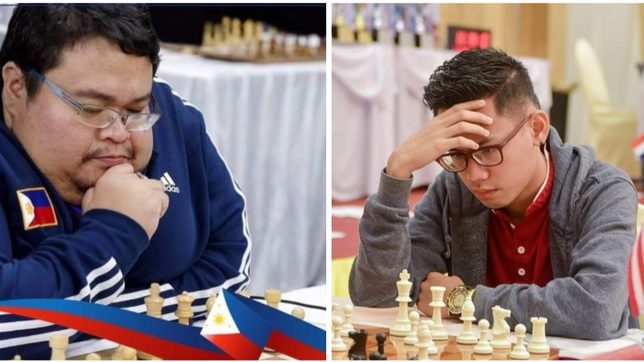 The Filipinos raised the Philippine flag in the seventh round of the 4th World Chess Championship for People with Disabilities, which saw them unleash a spectacular 4.5-point finish in five boards on Thursday night, November 11 via Tornelo online platform.

Playing on board 4 and just a point behind the unbeaten leaders, young tactician Darry Bernardo, who is only 19 years old and partially blind, was almost there scalping the head of the top-seeded Polish Grandmaster Tazbir Marcin.

In that match, the 26th-seed Bernardo had favorable Queen and two connected pawns pressing against the insecure black King defended by two Rooks in a study-like endgame position.

But Bernardo, whose 2114 Elo ratings paled by far in comparison to Marcin’s 2508, could not find the right continuation in panic time situation and was held to a draw via repetition of moves after 66 pushes in a Closed Sicilian duel.

“But when I found out the winning line to solve the jigsaw puzzle there was already a repetition of moves happening. He (Marcin) is a good defender deserving of GM status,” acknowledged Bernardo.

A win would have positioned Bernardo in a good sight for title glory heading into the penultimate eighth round Friday night, November 12 at 8 pm.

Also, the thrilling draw thus averted what could be a 5-0 sweep by the Philippine Paralympic bets as Arena Grandmaster Henry Roger Lopez, Fide Master Sander Severino, Jasper Rom, and the completely blind Rodolfo Sarmiento won all their respective matches to bolster the Filipinos’ chances in the team ranking.

Lopez played brilliantly with white in a tactical melee to bring down his Ukrainian opponent Vladyslav Pokotaiev after only 28 moves of the Semi-Slav Botvinnik Variation and catch up Bernardo at 5.5 points.

“It was really a prepared line that the Ukrainian could not remember. We already played that from long ago,” confided the resurgent Lopez.

Facing a drawish position with black against the sixth round conqueror of Sarmiento, Severino showed to Georges Vasquez of France why he is the reigning International Physically Disabled Chess Association (IPCA) champion.

Severino patiently maneuvered his pieces, including his King up the enemy’s territory.

He also made an exchange sacrifice for his other Rook and gave up his Bishop to empower a majority pawn-rolling half the board en route to a hard-earned marathon win in 85 moves of the London System.

Sarmiento, on the other hand, notched 4 points after defeating Beksultan Kudaibergenov of Kyrgyzstan with black in 47 moves of the King’s Indian defense.

FM Sargis Sargissyan of Armenia bested the untitled Mongolian and Severino’s only tormentor Ganbat Dashtseren in 53 moves of the Sicilian defense to grab the solo lead with a perfect 7 points.

Bernardo and Lopez now share the 11th to 23rd places with the No.1 seed  Marcin and nine others at 5.5 points, while Severino and Rom are bundled in a 20-man group of 5-pointers in this nine-round Swiss event that gathered 246 online chess combatants from around the world. – Rappler.com