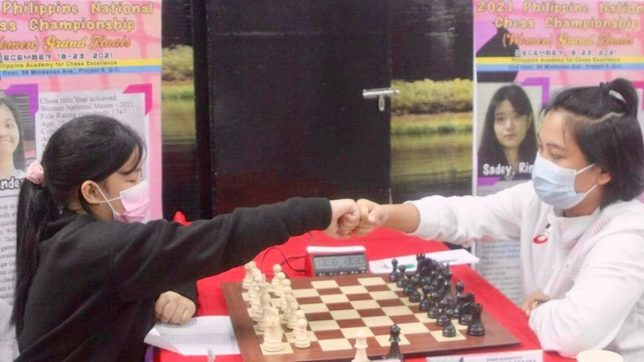 National Chess Federation of the Philippines

Ruelle “Tawing” Canino sent shockwaves with an upset win over the country’s only Woman Grandmaster Janelle Mae Frayna on Saturday night, December 18, less than a week after Quizon’s impressive triumph in the 2021 Philippine National Chess Championship as the youngest competitor at 17.

In a dominant endgame position where the gifted lass enjoyed a quality up advantage that would leave her an unmolested two pawns-queening, the 24-year-old Frayna resigned after a marathon 96 moves of the London System-Barry Attack variation in the opener of the Philippine Women’s Chess Championship at PACE building in Quezon City.

“I think we have an upcoming Woman Grandmaster,” GM Jayson Gonzales, chief operating officer of the organizing National Chess Federation of the Philippines, said after the teen Canino stunned the top-seeded Frayna.

Easily the winningest age-group campaigner with around 15 gold medals to show from international competition, Canino – who enrolled this year as a Grade 8 pupil of the Far Eastern University (FEU)- Fern in Quezon City – faces Woman International Master Marie Antoinette San Diego and Lexie Grace Hernandez next in the first double-header on Sunday, December 19.

“Our training preparation was meant to deal with older rivals. At least, Tawing was able to prove that her middlegame understanding has now improved,” Canino’s coach and trainer Jaime Frias told Rappler.

“It seems Frayna’s aura before the games start suggests that she’s still exhausted after her participation in the male-dominated Philippine championship in Mactan, Cebu,” added Frias.

The game between Woman Fide Master Allaney Jia Doroy and Marian Calimbo had been rescheduled after the latter was stranded at the Mactan International Airport in Cebu due to typhoon Odette.

A total cash prize of P135,000 and a slot to next year’s Hanoi Southeast Asian Games are at stake in the 12-player round-robin affair with the champion getting  P50,000 and the second and third placers out to receive P30,000 and P15,000, respectively, plus trophies. – Rappler.com