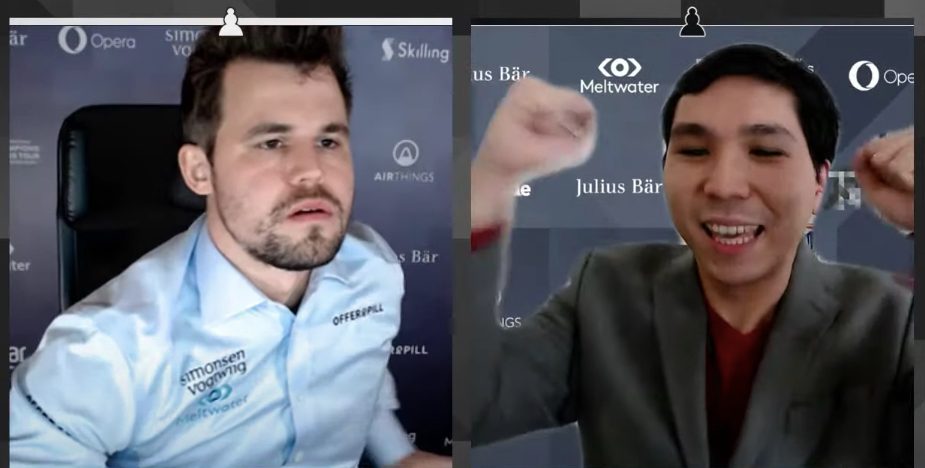 Wesley So and Magnus Carlsen. Screenshot from YouTube/chess24

MANILA, Philippines – Wesley So shook off a poor start to rule the blitz event of the 10th Norway Chess Tournament on Monday, May 30 (Tuesday, May 31, Manila time), in Finansparken, Starvagen.

Beaten by the returning Wang Hao in the opening round and settling for draws against five-time world champion Viswanathan Anand and Shakhriyar Mamedyarov, So found his bearing and bunched five wins, including one over world champion and national icon Magnus Carlsen, to prevail in the single-round robin event preceding the classical competition.

The Filipino-born reigning US champion started his recovery with a victory over French star Maxime Vachier-Lagrave and Norwegian No. 2 Aryan Tari before facing Carlsen, who was then leading the 10-man pack, in the sixth round.

Handling white, Carlsen opened up with the disrespectful a4 and paid the price as he lagged behind in time and eventually resigned.

After humbling Carlsen, So went on to beat 2005 world champion Veselin Topalov and Teimour Radjabov to pull ahead before drawing with Anish Giri to finish on top with 6.5 points.

Though there was no cash involved, the top five finishers will be rewarded with more opportunities to play white in the main tournament offering 750,000 Norwegian kroner (about P4.2 million) to the champion.

Carlsen is tagged the favorite in the elite event which he has won four times, including the last three editions. – Rappler.com