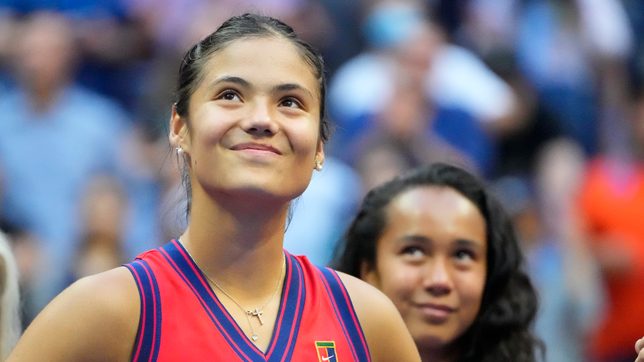 STAR POWER. US Open champion Emma Raducanu of Great Britain (left) and runner-up Leylah Fernandez of Canada watch a video during the trophy presentation after their final match.

Facebook Twitter Copy URL
Copied
‘It's funny because when I was watching it almost feels like that's not me who's playing and pulling off some of those shots,’ says US Open champion Emma Raducanu

US Open champion Emma Raducanu on Friday, September 17, said that rewatching her stunning victory in this month’s final felt like watching someone else, adding that her achievement had started to sink in but it was still difficult to fully comprehend.

The 18-year-old Briton took the tennis world by storm when she beat Canada’s Leylah Fernandez, 19, in straight sets last weekend to become the first qualifier in the men’s and women’s game ever to win a Grand Slam title.

“I think it’s gradually sinking in a bit more because last night I actually just rewatched the final and tried to relive a couple of the moments and remember how it felt,” Raducanu said in an interview with the BBC.

“So it is sinking in a little bit more but it is still such a whirlwind of an experience, I’ve loved every moment of it, but it is something that’s very difficult to fully comprehend.

“It’s funny because when I was watching (the final) it almost feels like that’s not me who’s playing and pulling off some of those shots. It feels like it’s someone else.” The teenager returned to the UK and was reunited with her family after a busy few days during which she made a host of public appearances, the most high-profile being at the Met Gala in New York this week.

Raducanu said the celebrations upon her return were low key. She had previously described her parents – she has a Chinese mother and a Romanian father – as tough and hard-to-please.

“(My parents) just gave me a hug when I came back really, nothing crazy, no big celebration,” she said.

“My mum made some really good homemade dumplings, but there was nothing crazy or over-the-top. I think that they’re just staying discreet and… saying they’re proud of me is enough.” Raducanu’s run sparked comparisons with some of the greatest achievements in sport, with marketing experts confident that she could become one of the world’s most marketable athletes.

Raducanu said she will leave the decision of how to spend the $2.5 million she picked up in prize money to her parents and her team and will instead focus on competing. – Rappler.com