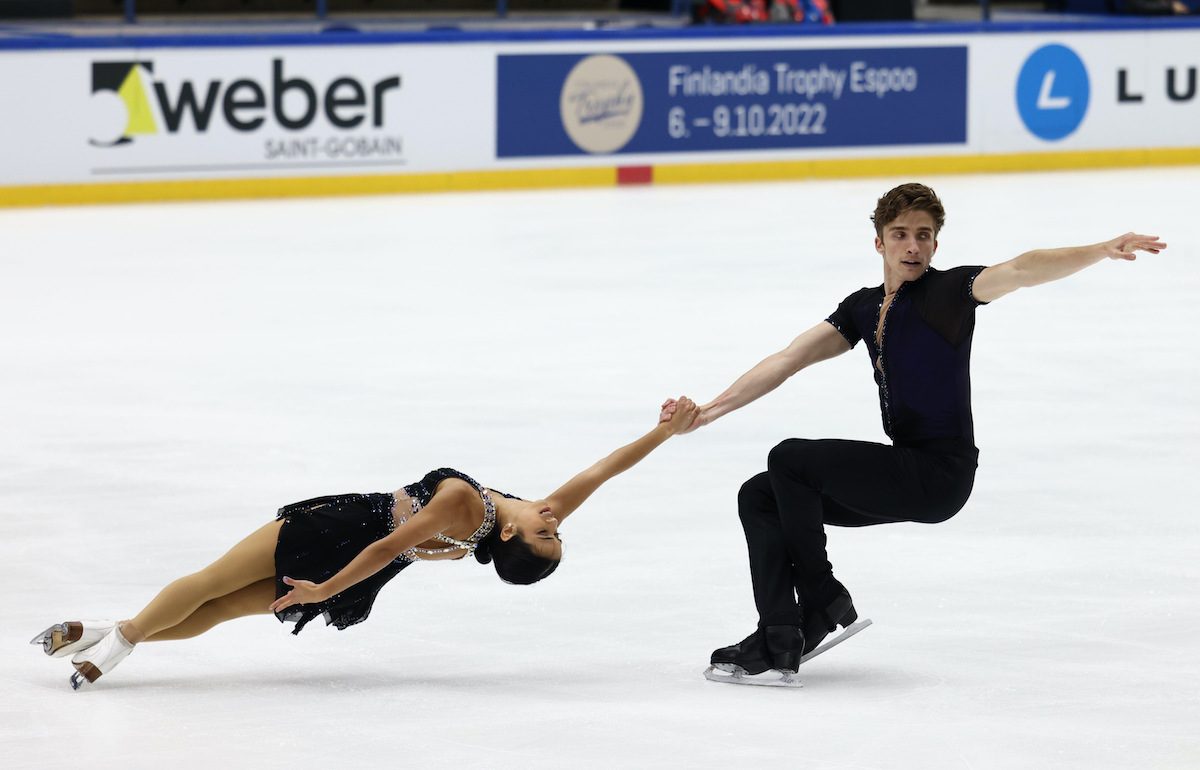 ROAD TO THE OLYMPICS. Isabella Gamez and her Russian partner, Alexander Korovin, have their eyes set on the 2026 Milano Cortina Winter Games.

MANILA, Philippines – International pair figure skaters Isabella Gamez and Alexander Korovin aim to showcase an even better form as they head to the 2022 Warsaw Cup in Poland calendared from November 17 to 20.

The Filipino Gamez and Russian Korovin hope they could have a much cleaner run compared to their silver-medal finish at the Trophée Métropole Nice Côte d’Azur in Nice, France recently.

“We definitely want to be looking for the levels that make our whole score better, we want to improve our scores, our levels for our lifts to land jumps and throws, just execute our elements cleaner,” Gamez, who’s based in the US, told Rappler in an interview.

Buoyed by their competition-best 95.22 points in the free skate and an additional 48.32 markers in the short program, the two claimed a total of 143.54.

The pair’s routine in the short program was accompanied by “I’ll Take Care of You” by Beth Hart and Joe Bonamassa.

In the free skate event, the two skated to “Exogenesis Part Two and Three” by Muse.

It had just been the second event for the Gamez-Korovin tandem after the Russian skater got clearance from the International Skating Union (ISU) earlier this year.

More importantly, the duo’s scores in both programs were enough to secure qualification at the Four Continents Figure Skating Championships slated February 7 to 12 at Colorado Springs in the United States, according to the Philippine Skating Union (PSU).

During their first competition at the CS Finlandia trophy competition in Espoo, Finland, the team ended up ninth out of 10 participants for 112.40 points.

The pair attributed their performance to an abrupt interruption in their practice as Hurricane Ian battered their town and their rink was used as an evacuation center.

But gradually, their partnership seems to be shaping up well, and the two are now targeting the 2026 Winter Olympics in Milan, Italy, with hopes of Korovin gaining Filipino citizenship via naturalization by then.

“I’m excited, it can be like very good if I can represent the Philippines because for me it’s a kind of challenge,” said Korovin.

“And it’s a dream to represent the Philippines in the world, and for us, we’re a real team and it’s very good.”

Per ISU rules, a pair is eligible to represent a country of either member.

Gamez had a prior partner, Canadian David-Alexandre Paradis, where they competed in the 2020 Four Continents Championships. The two went their separate ways at the conclusion of the season due to the pandemic and subsequent retirement of Paradis.

Korovin paired up with Gamez as early as February 2021 but could not compete since he still represented Russia and had to wait for the ISU’s go signal.

During the waiting period, the two had a chance to form an understanding of what style they had to grow accustomed to moving forward.

“Together, we both had different techniques coming from that he has a very strong European-Russian technique, and I had a very bold North American technique which we had to find a common ground,” recalled Gamez.

“We really took the time for those two years to meet in the middle for our skating and we really wanted, we really had to be patient for our techniques so that is where we are standing,” she continued.

“We still have a lot to learn from each other especially that this was our first competition competing together and we had to understand each other’s nerves and emotions and what we’re like.”

Gamez, who also previously represented Spain as a junior skater, was its national juniors champion in 2018. In the same year, she ended up 13th in the world junior championships.

Born to Gerardo Gamez and Marivic Ramirez, who were both born and raised in the Philippines, Isabella was not shortchanged of Filipino culture and heritage.

Her family also went home to the Philippines annually for over a decade to reconnect with their relatives.

But in early 2022, Gamez and Korovin flew to Manila together for the first time to meet the Philippine team skaters and are set to return to the country to compete in the National Open this December.

“The two were happy in their stay in the Philippines, since pair skating is like rarer that rare [in the country], and that many are not even aware of the sport,” said PSU chief Nikki Cheng in Filipino.

“People started to flock to the bleachers and watch them and were even offering to pay just to watch the two even closer, that’s how they were captivated by the pair,” she added.

According to Gamez, the two traveled just outside Manila, where they stayed in Rizal, went diving in Anilao, Mabini, Batangas, and watched a UAAP basketball game.

Cheng believes that the window is much bigger for pair figure skaters to be able to make it to the Winter Games and is optimistic that the two could do it.

“I am more optimistic for this pair because the competitive level is not as intense as women’s figure skating so if there’s more chances of winning, it’s in the pairs [category],” said Cheng.

“If they can sustain their fine form in the next few years, they might be really able to [make it to Milan].”

One proud relative keeping an eye out is former Senator Freddie Webb. Isabella’s mom is a grandniece of the 1972 Olympian. Her father, meanwhile, comes from an extensive line of doctors in the Philippines.

“We have been in contact during the past year, and that he knows I’ve been skating for a long time and we are very confident in our team, we have been sharing a lot of our footage of skating together… and he’s very confident that we can make history,” said Gamez of Webb.

“We have a good relationship and I hope to continue to make my country and my family proud just as much as he did.”

In their Olympic bid, Gamez and Korovin need to garner enough points and ranking placement from the World Championships and several major competitions heading to the world’s biggest athletic competition.

“I think at the end of the day, for one to qualify for the Olympics, it’s all about the mental aspect of how you can handle it and perceive yourself, and that’s mainly it,” said Gamez.

“It’s everyone’s dream to go to the Olympics, especially my partner and I, that’s why we teamed up and it’s going to be a long process but we have to both believe in each other that this is what we both want.” – Rappler.com