Facebook Twitter Copy URL
Copied
‘Everyone has a gold medal, everyone, but not me. I hate skating… I will never skate again,’ says an emotional Alexandra Trusova as the Russian teen settles for silver

BEIJING, China – The pressure weighing on teenage figure skaters was all too evident on Thursday night, February 17, when silver medalist Alexandra Trusova broke down in tears before the podium ceremony after the women’s single event at the Beijing Olympics.

The 17-year-old Russian, who attempted five quadruple jumps in a high-octane routine at the Capital Indoor Stadium, missed out on gold by 4.22 points after the judges favored her compatriot Anna Shcherbakova’s free skate.

World champion Shcherbakova, also 17, landed only two quads, and Trusova’s athletic performance to Cruella and the Stooges’s “I Wanna Be Your Dog” helped her score more points in the free skate, but it was not enough to make up for her disappointing performance in Tuesday’s short program.

With all the attention on 15-year-old prodigy Kamila Valieva, who in the wake of a doping scandal slipped to the ice and tumbled to fourth after topping the standings in the short program, Trusova’s moment of despair almost went unnoticed.

“Everyone has a gold medal, everyone, but not me. I hate skating. I hate it. I hate this sport. I will never skate again. Never,” Trusova said as she briefly left the sight of Eteri Tutberidze, who coaches her, Shcherbakova and Valieva.

“It’s impossible. That’s now how it should be.” 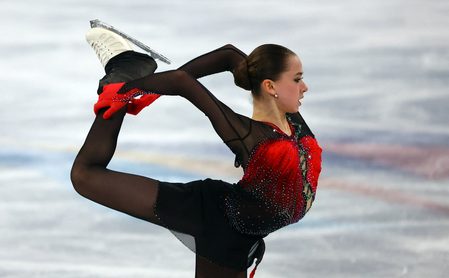 Trusova, the world championships’ bronze medalist, elaborated in the post-event news conference, where she was also close to tears.

“I haven’t been winning major events for three years. I always try to reach a goal, I always add more quads,” the 17-year-old said.

“And when I get to that, I will win. This didn’t happen, that’s why I was upset.”

Asked why she cried, Trusova said: “Just because. I wanted to cry, so I cried. I’ve been three weeks alone without my mom, my dogs. So I cry.”

The Russian Olympic Committee team has been in the eye of a doping storm since the news broke last week that Valieva had failed a doping test at her national championships last December.

She was eventually cleared to skate on Monday in the women’s single event by the Court of Arbitration for Sport (CAS) after sport’s highest court upheld the Russian Anti-Doping Agency’s decision to lift a provisional ban on her.

Valieva had already helped the Russian Olympic Committee win the team event – for which there will be no medal ceremony until her doping case is resolved. – Rappler.com