The Palaro male athletes in make-up 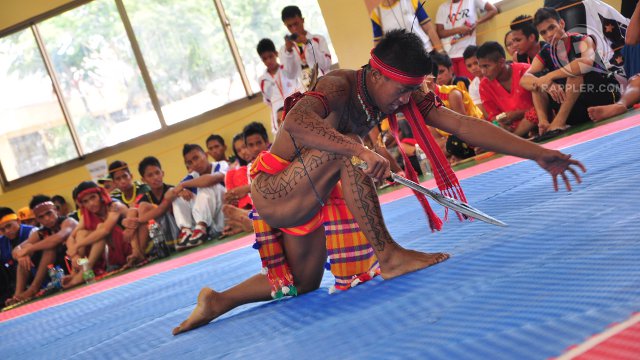 LINGAYEN, Pangasinan—It is a battle of artistry.

But this is not a dance competition. This is Palarong Pambansa 2012.

This is likha-anyo arnis, an event in this year’s games. Unlike most sports, there’s no combat here—just a show of strength, flexibility, and beauty of form.

Participants perform a sequence of choreographed movements using either one or 2 batons set to ethnic music. The movements are based on different ways of striking an opponent using the arnis.

More than just the arm movements, the athletes also do cartwheels, backflips and high jumps—while throwing the arnis in the air at the same time. The ability to do this is counted as degree of difficulty, which is one of the criteria for judging the performance.

They also take caution to avoid dropping the stick —called laglag—as this will earn them a 3-point deduction in their performance score.

Througout their performances, the athletes acted like ferocious warriors at battle—looking fiercely at the crowd like each one was an opponent to be devoured, shouting like warriors about to charge at their enemy.

This is part of the theatrics of the event.

“Lumalaban ka diyan, eh (It's like you're fighting)," Robles said.

Other athletes demonstrated their excellence in the sport by doing a segment of their routine while blindfolded. Team performances require 3 athletes -- all blindfolded -- to move together in synchrony.

Aside from coordination, synchronization, and degree of difficulty, artistic expression and creativity are also criteria for judging.

Surprisingly, the costumes—which are most lovingly conceptualized and created by trainers, and sometimes, even the athletes themselves—don’t exactly count. 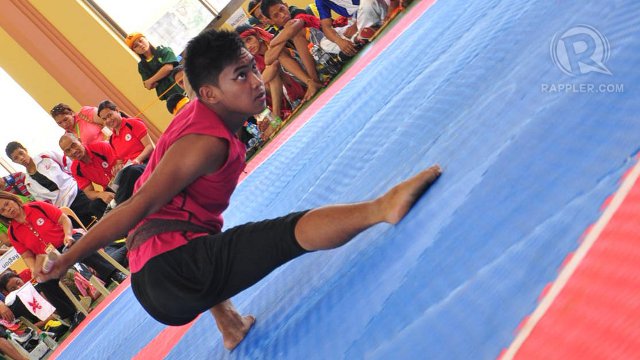 Arnis tournament manager Al Pelgone emphasized that the wearing of a costume is not mandatory. He even said that one could compete in iikha-anyo wearing only the regular arnis uniform—plain white shirt and red pants.

The use of music is also optional, he added.

But what’s worth noting in this event is how all athletes—boys and girls alike—use make-up.

Angelo Bermundo of the Bicol Region answered in the negative when asked if it was okay for him to wear make-up during competitions.

“Kasi parang ayokong ganito ang itsura ko (I don’t like the way I look)," he said, pointing to his eyeliner.

‘Tiger look’ is the peg for make-up design for likha-anyo. The athletes need to look like ferocious tigers ready to attack their prey.

Coach Eldridge Go of Caraga, however, has a different reason for making his athletes wear makeup.

“Kailangan mag-make-up kasi ‘pag kinakabahan, namumutla,” he explained. “Kung baga, tinatago ng make-up iyong kaba (They need the make-up as they turn pale when they get nervous. The make-up conceals their nervousness)."

Bermundo’s teammate, Romy Navas, is fine with using make-up during competitions. But John Badana of Zamboanga has qualms about it. 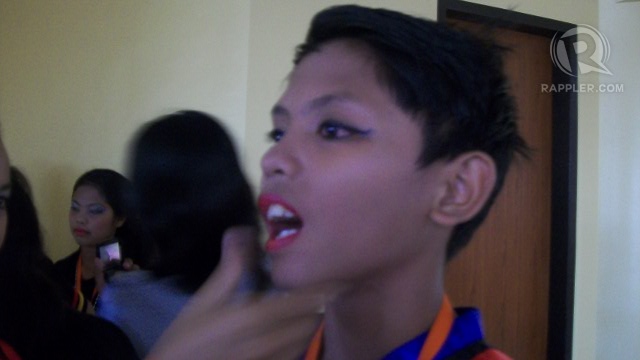 DISGUISED. The makeup makes the athletes look more convincing as warriors--while concealing their fears at the same time. Benise Balaoing

Asked about the boys wearing make-up to the games, Pelgone said it is optional.

Make-up, after all, isn’t necessary to win likha-anyo. Hans Oliver Magallis of Cordillera Region, bronze medallist for this year’s double baston event secondary boys division, did not use the typical tiger-look.

He was, however, decked in an intricate traditional Igorot costume.

Arnis is said to have probably originated from the Spanish era. Filipinos reportedly disguised their training as a folk dance.

On the inside, the fierce-looking athletes are happy, fun-loving, bubbly children.

And Magallis, the ferocious, bold and fearless athlete, was meek, soft-spoken and rather shy off the battlefield.

Arnis, it seems, was designed to be even more effective when disguised. —Rappler.com 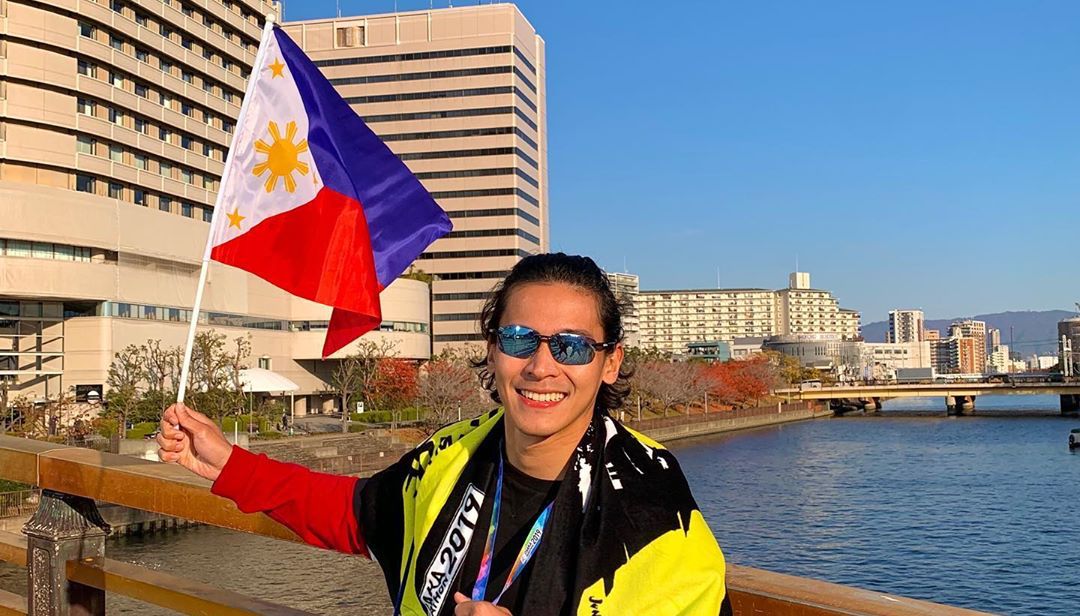