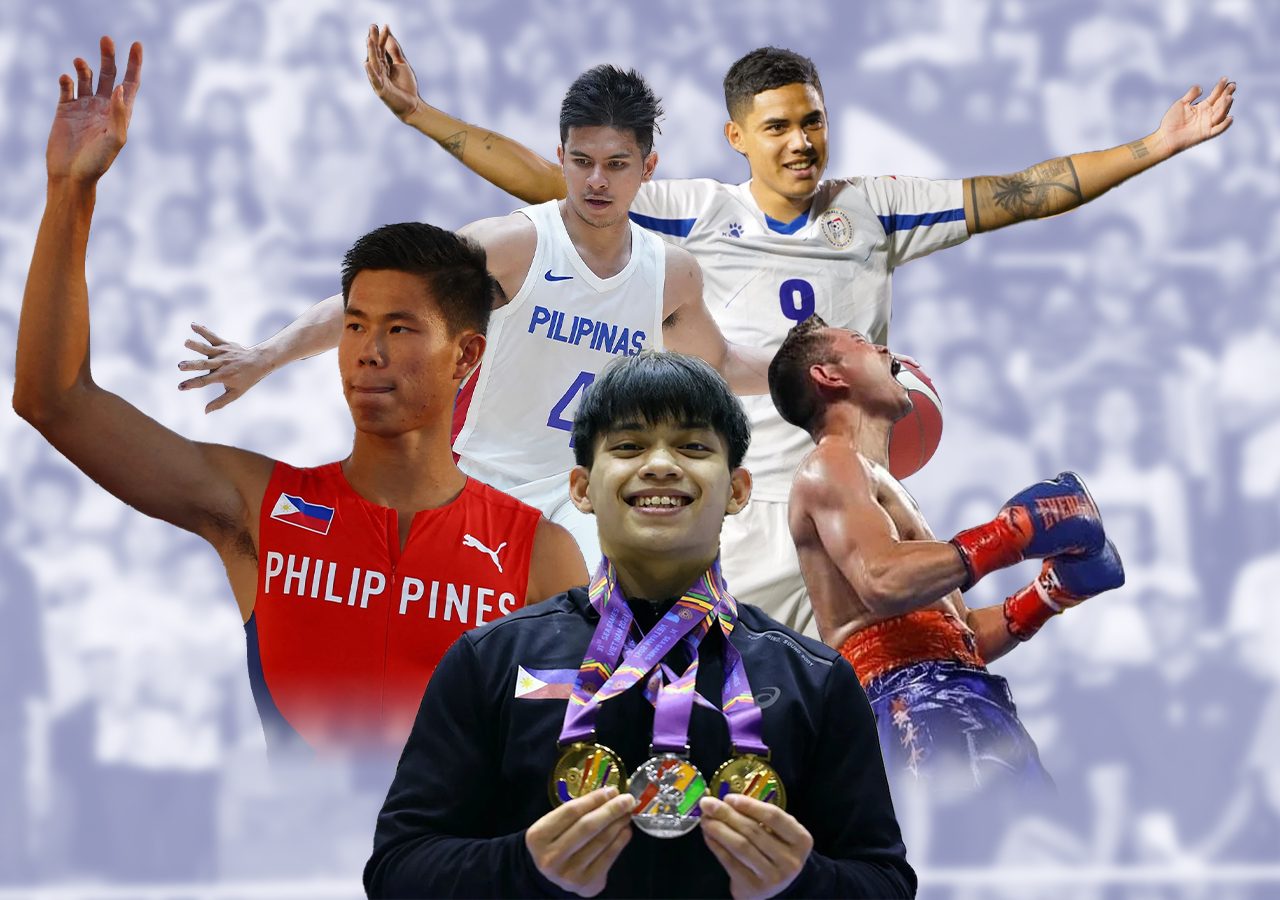 MANILA, Philippines – In the first year when the athletic world was back with a full calendar after the pandemic put the world on a standstill, the Philippines looked to sustain the gains from recent years when the country’s sports scene was on an upsurge.

After looking at how Filipina athletes continued to shine in 2022 and dissecting the important events that transpired in basketball, we present the last part of this three-part yearend series where we review the significant happenings in Philippine sports this year.

SEA Games as springboard to 2023

Before the COVID pandemic, the Philippines had its best outing in the 2018 Asian Games in terms of medal haul since 2002, winning the country’s most number of gold medals since 2006. It was followed by the overall championship in the 2019 Southeast Asian Games, which the country hosted. In the Tokyo Olympics last year, the Philippines bagged its most number of medals at four, including its first-ever gold medal courtesy of weightlifting star Hidilyn Diaz.

The momentum of these splendid performances was stymied by the suspension of all athletic competitions in 2020.

The Philippines fielded a leaner delegation in this year’s SEA Games held in Hanoi, Vietnam. The country slipped to fourth place in the overall standings.

The slide in the medal tally did not exactly depict an accurate picture of the country’s performance.

Though the Philippines copped 52 gold medals in Vietnam, which paled in comparison to the 149 it won in the 2019 edition, what must be noted was that the country was represented by just 656 athletes in 38 sports. When the country hosted the SEA Games in 2019, it fielded 1,115 athletes competing in 56 sports.

In 2019, the Philippines won 387 medals. The total medals brought home by our athletes that year was 227. Just like in 2019, athletics contributed the most number of medals with 26. Gymnastics chipped in 14, while dancesports and wrestling had 12 each.

This still bodes well for the country as 2023 will be busier with the rare occurrence of the SEA Games and the Asian Games happening in the same year.

2022 was the year EJ Obiena truly stamped his class as among the world’s best.

That he did it despite the very public rift with an initially unsupportive Philippine Athletics Track and Field Association (PATAFA) and a bout with COVID-19 made his ascension to the elite tier even more remarkable.

Obiena missed out on the 2022 IAAF World Championships in Belgrade, Serbia in March when the PATAFA, under Philip Ella Juico, refused to endorse his participation. Obiena was also excluded from the roster for the SEA Games. Fortunately for him and the country, the Philippine Olympic Committee (POC) stepped in.

Obiena proved he is the undisputed best pole vaulter in the continent, setting a new SEA Games record in May when he emerged champion and resetting the Asian record, both of which he previously held.

An athlete of Obiena’s talent and potential, though, deserves a bigger stage. And he delivered big against top level competition which included world champions and Olympic medalists.

But Obiena did not stop there.

He placed third during the World Athletics Championships held in Oregon, United States, becoming the first Filipino to secure a podium finish in the world championships.

In the Wanda Diamond League held in Brussels, Belgium in September, Obiena became the first vaulter in over a year to beat world No. 1 Armand Duplantis of Sweden. Obiena cleared 5.91 meters to win the gold, while the seemingly invincible Duplantis could only leap a height of 5.81 meters. Tokyo Olympic silver medalist Christopher Nilsen of the United States placed third.

They used to say that a Filipino fan’s sports vocabulary mostly revolves around the three Bs – basketball, billiards, and boxing.

2022 will come to an end with Filipino fans experiencing a rare occurrence, the reality of not having a boxing world champion. This is unthinkable for a country which has produced proud champions like Manny Pacquiao, Flash Elorde, Pancho Villa, Luisito Espinosa, and Gerry Penalosa who have all made their mark in the international boxing scene.

Even during the pandemic, the Philippines still had close to 10 world champions, not a bad number considering pro boxing cards were few and far between. Pacquiao, Nonito Donaire, Jerwin Ancajas, John Riel Casimero, Pedro Taduran, Rene Mark Cuarto, Vic Saludar, and Mark Magsayo all had world championship belts wrapped around their respective waists.

Each of those world championships would find new owners in 2022 as all Filipino champions ended up dropping their titles. Casimero lost the WBO bantamweight belt outside of the ring last May after failing for the second time to defend it and Ancajas conceded unanimous decision verdicts twice to Argentina’s Fernando Martinez for the IBF junior bantamweight title.

Donaire might have boxed his last after bearing the brunt of a brutal beatdown that ended in the second round at the hands of Japanese star Naoya Inoue in a bantamweight title unification bout.

In less than two weeks in early July, the Philippines lost two world titles as Cuarto and Magsayo both were on the losing end of split decision verdicts.

A little known 23-year-old from Sarangani somewhat saved the day, or the year, for Philippine boxing. Undefeated Dave Apolinario flew to South Africa to score an impressive first-round knockout against home bet Gideon Buthelezi in July for the vacant IBO flyweight championship.

The bigger picture for Carlos Yulo is still the 2024 Paris Olympics, where his coach Munehiro Kugimiya projects him to contend for more than just one gold medal.

In the long and arduous journey to Olympic greatness, Yulo has been subjected by his team to a gauntlet of tough competitions, all aimed to toughen him up and help him prepare for 2024.

In this year’s SEA Games in Vietnam, Yulo emerged as the most bemedalled Filipino athlete, capturing five gold and two silver medals.

Yulo followed this up in June with another masterful performance.

In the Asian Senior Gymnastics Championships in Doha, Qatar, Yulo impressed anew by collecting three gold and one silver medals. He finished first in floor, vault, and parallel bars, and missed out on a fourth gold when he wound up second in the individual all-around.

After becoming world champion in the floor exercise in 2019 and in vault in 2021, Yulo did not do too shabby in this year’s World Artistic Gymnastics Championships in Liverpool, England even as he was unable to win gold. He still brought home a silver in vault and a bronze in parallel bars.

Yulo would have probably preferred to garner more golds in 2022, but he did what he needed to do to bring honor to the country. These are all part of the process from which Yulo can be expected to come out more prepared for the next two years.

The contrast in Philippine football

One cannot blame Filipino fans for comparing the performances this year of the Filipinas and the Azkals.

The gulf in their results is as vast as the entire length of a football field. While the Filipinas are the newest sensation in the country, the Azkals have become a team in search of its own identity. While the women’s program is flourishing, as evidenced by the recently concluded PFF Women’s Cup and Kaya FC winning the SingaCup Women’s Football Championship in Singapore, the men’s program is floundering.

The Azkals lost in March to Malaysia and Singapore in the AFF Championship group stage. In the AFC Asian Cup qualification in June, the Azkals drew with Yemen and beat host Mongolia on a last minute goal before getting blasted by Palestine, 0-4.

Along the way, the Azkals have had two coaching changes, initially bringing back Thomas Dooley who was yet again replaced by Josep Ferre of Spain.

In their 2022 AFF Mitsubishi Cup opener this December, the Azkals absorbed a stunning 3-2 loss to Cambodia. The last two times the two sides played each other, the Philippines prevailed with scores of 8-0 and 3-0.

It is disheartening for football fans to see this happen to the Azkals, who once upon a time captured the imagination of an entire nation. What makes it even more painful is that the Azkals had already made some headway in the past.

It will take another miracle to revitalize the Azkals program. One can only hope it happens in 2023. – Rappler.com