FUTURE. Jhanlo Mark Sangiao, one of only two Team Lakay winners of the night, pins down Anacleto Lauron.

Facebook Twitter Copy URL
Copied
The Benguet-based stable, once the holder of four ONE titles, loses its last championship belt

MANILA, Philippines – Team Lakay, once the hoder of four ONE Championship title belts, just witnessed its last gold slip from its hands when Jarred Brooks defeated Joshua Pacio for the ONE strawweight belt in ONE 164 on Saturday, December 3 at Mall of Asia Arena.

Aside from dropping the title, five of the seven fighters who fought in ONE’s return in the Philippines also lost their respective bouts.

“We have to sit down and talk about our lapses again,” said Team Lakay coach Mark Sangiao. “For every loss, there are consequences and mistakes. We have to discuss those mistakes and try to improve again. In Team Lakay, we always learn.”

Former world champions Eduard Folayang and Geje Eustaquio saw the other end of a brutal knockout in front of the Filipino crowd.

And just a few weeks ago, Kevin Belingon, who held the ONE bantamweight title back in 2018, found himself on a four-match skid when he suffered another vicious knockout loss. 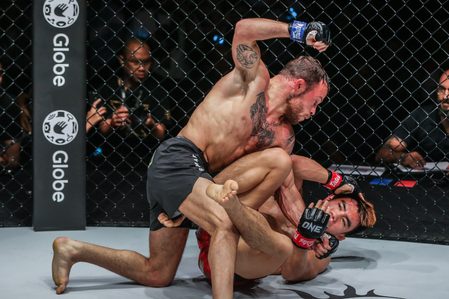 Sangiao believes it’s time for the veterans to come back to the drawing board to reevaluate their game plan.

“[This] will be a big challenge to all our athletes,” he said.  “Once in their lives, they became champions. So if they want to be champions again, they already know the secret.”

“They are athletes and they know this sport,” Sangiao added. “They can see the lapses and what they need to improve. And as a coach, I need to sit down and talk to them again to improve what is lacking.”

But not all is lost for the Benguet-based stable.

Sangiao witnessed his son, Jhanlo Mark Sangiao, submit his opponent to keep his unblemished record and bag a $50,000 bonus (P2.8 million) for delivering the Performance of the Night.

Even ONE FC’s big boss Chatri Sityodtong rained praises on the younger Sangiao and called him a future world champion.

“I’m very happy about that because they can see the potential of Jhanlo,” said coach Mark. “I can also see that he’s a future champion, but that also depends on him. This is a team effort.”

Aside from Jhanlo, Jeremy Pacatiw, the second Team Lakay fighter who won in ONE 164,  also pocketed a performance bonus from ONE Championship. – Rappler.com