Swiatek to take over Barty’s world No. 1 spot after Miami victory TOP-RANKED. Iga Swiatek celebrates after her match against Victorija Golubic in the second round of the Miami Open.

Iga Swiatek will replace Ash Barty as the No. 1 women’s player in the world after her 6-2, 6-0 thrashing of Viktorija Golubic in the second round of the Miami Open on Friday, March 25.

The 20-year-old is the first Polish player to achieve the ranking and the 28th women ever to reach the peak, which will be official when the WTA rankings are updated on April 4.

Swiatek, who has already won titles in Doha and Indian Wells this year, takes over after the Australian’s surprising announcement to walk away from the game after winning three Grand Slam titles including January’s Australian Open.

The 25-year-old Barty cited satisfaction with her career and burnout with the Tour’s demanding schedule as the reasons for her decision to retire. 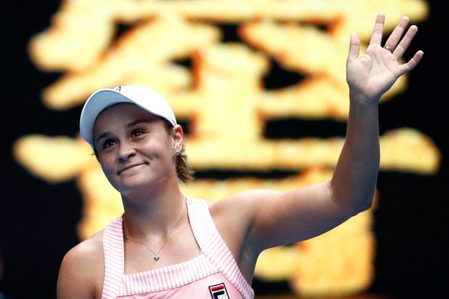 With her win over Golubic, Swiatek improved to 21-3 on the year and is on a 12-match winning streak.

“There is no better person,” Barty said in a message after the match. “The way that she’s brought this fresh, fearless energy onto the court has been incredible.

“I hope she can take it and still be her, do it her own way, and really chase what she’s after in her career and her dreams.” – Rappler.com