HOT RUN. Alex Eala picks ups her fourth win in as many days.

Facebook Twitter Copy URL
Copied
Despite ending in straight sets, the match was a lot a closer than it looked as Alex Eala had to dig deep to dispose of Canadian Katherine Sebov

MANILA, Philippines – After a shaky opening set, Alex Eala found her groove in the second to prevail over 23-year-old Katherine Sebov of Canada, 7-6(6), 6-2, to advance to the quarterfinal of the W80 RSF Pro Open on Thursday, October 6 (Friday, October 7, Philippine time) at the Rancho Santa Fe Tennis Club in California, USA.

Eala, however, had to dig deep in the first set against Sebov, a member of the Canadian national team who played in the 2017 Fed Cup Americas Zone Group I.

Sebov, who upset seventh seed and fellow Canadian Carol Zhao in three sets in the first round of competition, had her chances in the tiebreak but Eala managed to do just enough to pocket the opening set.

When the second set came, Eala, ranked 281st in the world, made her adjustments and limited her double fault to just one as she asserted her dominance over Sebov, who’s ranked a rung above the Filipina at 280th.

Despite ending in straight sets, the match was a lot a closer than it looked. Eala scored a total of 80 game winners and points but Sebov was not too far behind with 72. Sebov, in fact, had more service points at 39 versus Eala’s 26.

With her fourth win in four days, including two in the qualifiers, Eala, the 2022 US Open girls singles champion, will advance to the quarterfinals on Friday, October 7 (Saturday, October 8, Philippine time).

Zacarias currently ranks 229th in the world and had a career-high 181. 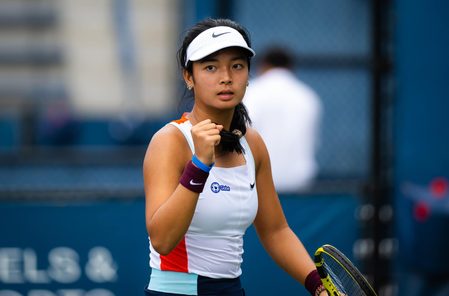