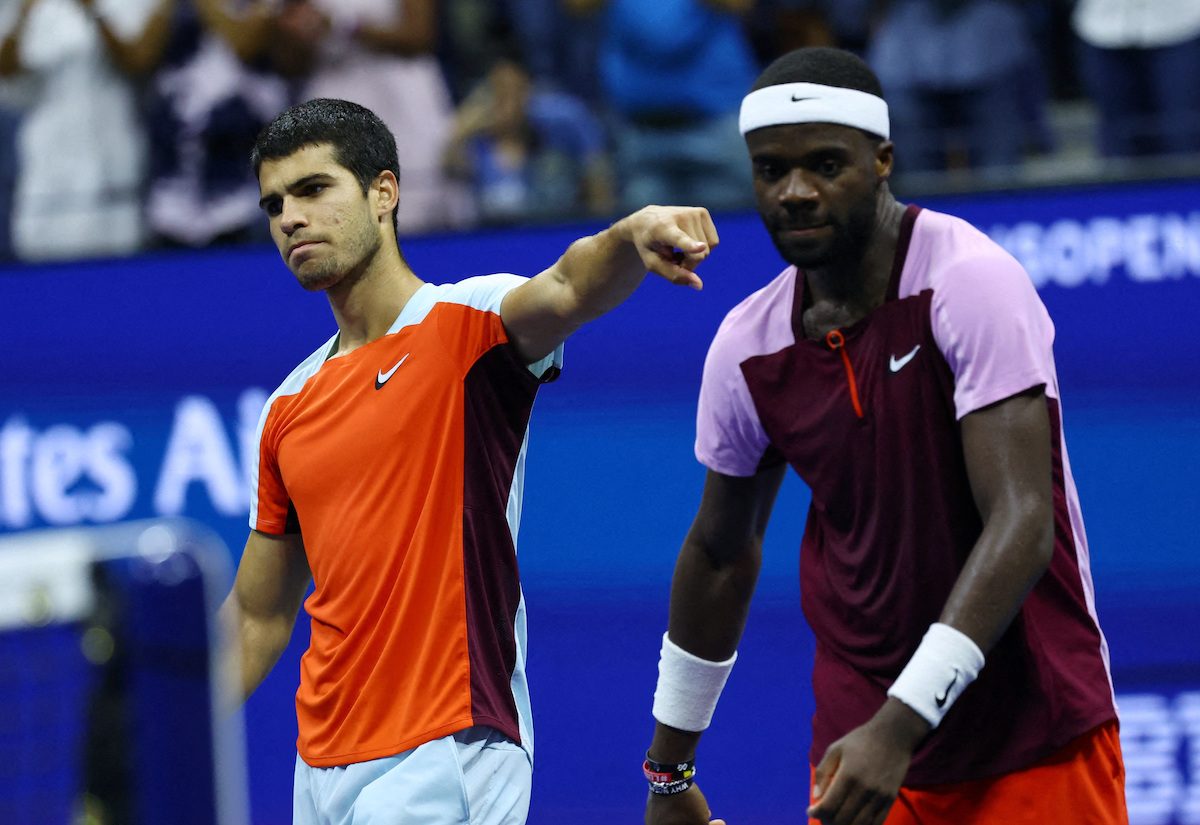 Despite playing into the early morning hours in his previous two five-set matches, the 19-year-old showed no signs of fatigue on Friday, September 9, racing around the court to win the hard-fought battle.

“We are in a semifinal at a Grand Slam and we have to give everything we have inside, we have to fight until the last ball,” Alcaraz said in an on-court interview.

If he can beat Ruud, Alcaraz would become the youngest man to be crowned world No. 1, breaking the mark set by Australian Lleyton Hewitt, who was 20 when he became the world’s top ranked player in 2001.

No American man has hoisted a Grand Slam trophy since Andy Roddick won the US Open in 2003, and Tiafoe was the first Black American man to reach the semifinals at Flushing Meadows since the late Hall of Famer Ashe did so in 1972.

“This one really, really hurts,” Tiafoe said in an on-court interview.

“Too good from Carlos. You’re going to win a lot of Grand Slams, you’re a hell of a player, a hell of a person. I’m happy I got to share the court on such a big stage with you.”

“I am going to come back and I will win this thing one day. I’m sorry guys.”

Tiafoe, whose parents fled civil war in Sierra Leone and who was exposed to the sport when his father worked as a caretaker at a tennis center in Maryland, had the sold-out crowd in his corner, especially after he saved a match point in the fourth set.

But there was still plenty of love for Alcaraz, who has electrified the tennis world with his acrobatic shotmaking and youthful vigor.

Alcaraz got off to a sluggish start, double faulting twice in the first set tie-breaker including one on set point to hand Tiafoe a 1-0 lead.

He raised his level to win the second set, breezed through the one-sided third and took Tiafoe to the brink in the fourth before the American produced an incredible fight back, winning his eighth tiebreaker of the tournament to set up a decider.

But there would be no escape from Alcaraz, who broke to open the fifth set and never looked back, sealing the win when Tiafoe’s shot hit the net on match point.

It was the 50th match win for Alcaraz, the most of any player on the ATP Tour this year.

Alcaraz, seeded third, will look to claim what could be the first of many Grand Slam trophies when he faces French Open finalist Ruud, who produced a confident four-set win over Karen Khachanov earlier on Friday.

Alcaraz beat Ruud in straight sets in the Miami Open final in April.

“It’s amazing to be able to fight for big things. First time in a final of a Grand Slam. I can see the No. 1 in the world and at the same time it is so far away,” Alcaraz said.

“I have one more to go against a player who plays unbelievable. He deserves to play in the final. He played the final of a Grand Slam in Roland Garros and this is my first time.”

“I’m going to give everything I have.” – Rappler.com