Facebook Twitter Copy URL
Copied
‘They’re the closest thing to home for me so it’s always a great opportunity, a great feeling to see them and play with them too,’ says Thirdy Ravena of his fellow Filipino imports in the Japan B. League

MANILA, Philippines – Thirdy Ravena admits it’s always a “challenge” to go up against his fellow Filipino imports in the Japan B. League.

But at the same time, the former Ateneo standout said he relishes these encounters as he gets a chance to catch up with his “Filipino brothers.”

“There’s always gonna be a challenge at the back of your head – trying to outplay each other,” said Ravena after his San-En NeoPhoenix completed a weekend sweep of Dwight Ramos’ Levanga Hokkaido.

“But all I try to think about is really trying to focus on the system, trying not to get carried away with the matchup, or not trying to do my own thing, but just sticking to what we need to do as a team in order to win. But you know, it’s always fun.”

Ravena helped his team snatch its second win of the campaign as he tallied all-around numbers of 10 points, 8 rebounds, 6 assists, and 2 steals last Sunday.

During the game, the 25-year-old Ravena said he didn’t really ask to be pitted against Ramos.

“It’s more of a natural thing you know, just looking at the matchups and seeing who we can guard or who’s in our position or who we can play to be as efficient as possible,” said Ravena.

Despite Hokkaido’s loss, Ramos had an eye-catching highlight at the 7:12 mark of the first quarter as he drove past Ravena near the baseline before rising up for an uncontested right-handed slam dunk.

In the following possession, Ravena, who was not being guarded by Ramos that time, quickly answered back with a layup after receiving a hand-off on top of the key then a screen to help shake off his man.

“When you’re on the court, you know it doesn’t matter if he’s Filipino or not. It’s always about going head-to-head with whoever you’re going up against. It’s seeing if you have an advantage,” said Ravena.

“Of course, it’s a little bit of an additional motivation to play harder, but we should play hard every single game. So for me it’s just when we’re on the court, we forget that we’re brothers. We play as players and we just enjoy after the game, before the game, and we leave it out on the floor.”

Ravena said it’s great to have 12 Filipinos now seeing action in Japan’s pro league, just a couple of years after the three-time UAAP Finals MVP took the unexplored path to the Land of the Rising Sun right after his collegiate career.

“Seeing my Filipino brothers here just brings me closer to home, reminds me of home, and makes me feel at home whenever I’m with them,” he said.

“They’re the closest thing to home for me so it’s always a great opportunity, a great feeling to see them and play with them too.” 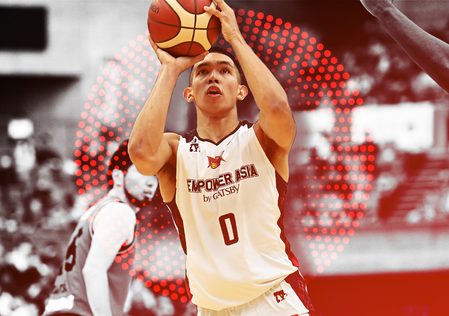