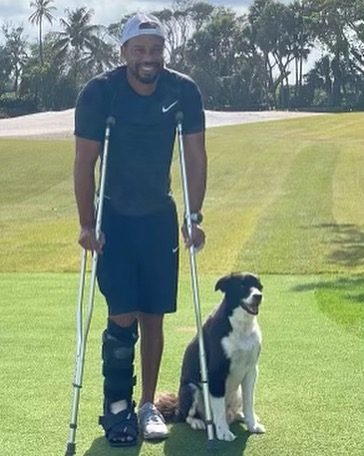 RECOVERY. Tiger Woods' leg was badly hurt after figuring in a car crash two months ago.

Facebook Twitter Copy URL
Copied
Golf superstar Tiger Woods posts a photo of himself on crutches, saying his rehab is 'coming along'

Tiger Woods took to social media on Friday, April 23, to talk about his work-in-progress backyard practice golf course in Jupiter, Florida, his dog – and to show the first photo of himself since his car crash in February.

In the photo, Woods is using a pair of crutches and has a cast on his right leg and foot. He is recovering from open fractures to his tibia and fibula, which needed a rod inserted to aid healing, and also foot and ankle injuries that needed screws and pins placed to aid in stabilization.

Woods wrote accompanying the picture, “My course is coming along faster than I am. But it’s nice to have a faithful rehab partner, man’s best friend.”

Woods, who has won 15 majors, crashed his SUV on February 23. The vehicle left the roadway in the Los Angeles County city of Rancho Palos Verdes, smashed into a sign, crossed the center divider and barreled down the shoulder of the road before stopping with the driver’s side down.

On April 7, the LA County sheriff attributed the main causes of the crash as excessive speed and Woods’ failure to negotiate a curve in the road. A sheriff’s spokesman also said that because there was no evidence of the vehicle braking, Woods likely pressed the accelerator accidentally rather than the brakes.

The 45-year-old American was not cited in the crash.

Woods played only three events in the 2020-2021 PGA Tour season, most recently the 2020 Masters that was delayed until November, as he was recovering from back surgery. His career earnings are listed at more than $120 million.

He was hospitalized for almost a month after the automobile crash. – Rappler.com