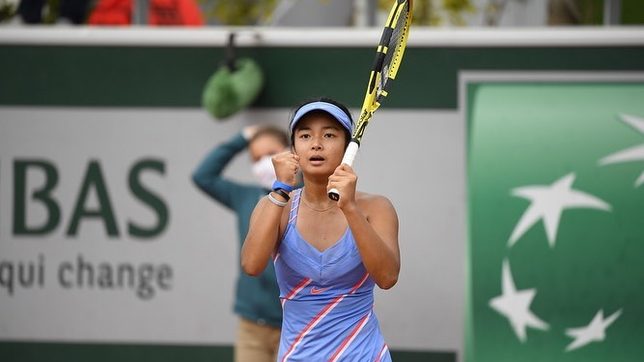 Alex Eala made headlines in the 2020 Roland Garros tournament as she continued to break barriers in Philippine tennis. (FAST FACTS: Who is teen tennis sensation Alex Eala?)

Though she had ended her campaign in the semifinals, the 15-year-old made history by becoming the first Filipino in 35 years to clinch a last 4 berth since Felix Barrientos in the 1985 Wimbledon juniors tournament.

Here is the story of Eala’s road to the French Open girls semifinals:

Seeded No. 2 in the girls singles tournament, Eala cruised through the opening round with a 6-4, 6-1 victory over juniors world No. 55 Natalia Szabanin of Hungary.

The world No. 4 Filipina, though, had to overcome a 0-4 hole by stringing up 6 straight games to control the match.

Pigato and Alvisi, though, proved that they were a team to beat as they rolled to the girls doubles finals.

In the second round, Eala faced a tougher opponent in juniors world No. 56 Mara Guth as the German stretched the match to a decider following an extended set, 6-1, 5-7, 6-4.

After the German gained momentum in her 2nd set win and broke serve early in the decider, the world No. 4 escaped the 4-4 stalemate and answered back with a crucial break point of her own to end the match.

Guth threatened Eala’s campaign for a first Grand Slam title by converting 7-of-13 break points to match the Filipina’s production of 10-of-19 break points.

Eala secured her first Grand Slam quarterfinals appearance in the girls singles tournament as she got past Leyre Romero Gormaz of Spain.

Eala showed tenacity again as she battled through a 5-1 deficit in the 2nd set and scored 3 straight games.

The 15-year-old rode on her hot momentum to quickly close out the match and deny Romero-Gormaz of a comeback.

Prior to the 2020 French Open, Eala only made it to the third round of this year’s Australian Open juniors singles tournament.

By the third round, Eala was the highest seeded player left in the tournament as No. 1 seed Victoria Jimenez Kasintseva of Andorra was ousted by unseeded Alina Charaeva of Russia, who eventually cruised to the girls singles final.

In the last 8, Eala was matched up with juniors world. No 33 Linda Noskova of Czech Republic, who won 3 clay titles in 2019.

The juniors world No. 4 defeated the Czech, 4-6, 6-3, 6-2, to clinch a career junior Grand Slam semis berth in the singles tournament.

The opening set loss did not derail the Filipina from making it to a quarterfinal to remember as  she bounced back with a 3-0 start to the 2nd set.

Eala ended her 2020 Roland Garros campaign in the semifinals as she surrendered to tournament No. 3 seed Elsa Jacquemot, 6-3, 6-2.

Both players were playing in their first junior Grand Slam semifinals, but Frenchwoman Jacquemot had the home court advantage.

The 17-year-old became the first French to reach the girls’ singles final since Kristina Mladenovic won the junior title in 2009.

Eala’s girls singles semis appearance marks her best finish in a Grand Slam since her first Major appearance in the 2019 US Open.

The Filipina Rafa Nadal Academy scholar had her first taste of Grand Slam action in 2018 when she was given a wildcard to play in the 2018 Roland Garros qualifying tournament.  – Rappler.com