MANILA, Philippines - There will be one less Filipino-American wrestler on TNA Impact Wrestling.

TJ Perkins, who wrestled under the name Manik, is now a free agent after American promotion Total Nonstop Action informed him that his contract would not be renewed.

The former TNA X-Division champion had been off TV since November 25, when he lost a World Title Series qualifying Triple Threat Match, being pinned first by fellow Fil-Am DJ Z and then by Tigre Uno, leaving him out of the TNA World Heavyweight Championship tournament.

(READ: Pro wrestler DJ Z on Filipino pride and life in the ring)

“I'm not being renewed I'm told,” Perkins, who had appeared in TNA on-and-off since 2004, said on his Twitter account. Perkins later added: “There was never an explanation given. Just the notice.”

The announcement on Twitter was met with an outpouring of support from fans of the 31-year-old high flyer.

“Don't be sorry, it's just a change for me. I'm sorry to those that want to see me stay. Would change it if I could,” Perkins told one fan. 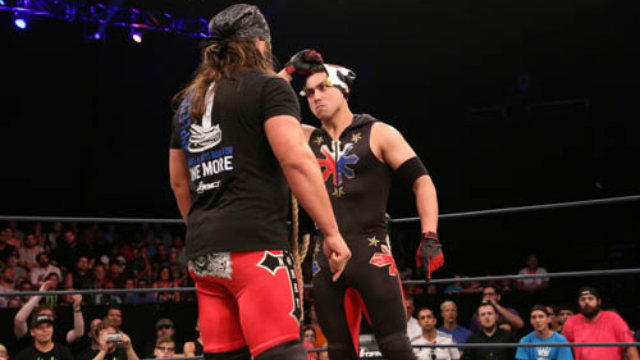 Perkins was primed for a big push after unmasking but lost in an Ultimate X match for the X-Division title shortly after.

Perkins, a native of Los Angeles, initiated the #AllWeWantIsTJP Twitter campaign for a character change after breaking with The Revolution in October and got his wish briefly, wrestling unmasked in an Ultimate X match at TNA’s Bound for Glory pay-per-view against DJ Z, Andrew Everett and Tigre Uno. The mask returned at the behest of TNA management in subsequent matches on Impact Wrestling.

In a 2015 interview with Rappler, Perkins recounted his journey through the wrestling scene, during which he overcame homelessness before signing with TNA.

Perkins has been appearing for Philadelphia-based independent promotion Evolve. Other promotions around the world include New Japan Pro Wrestling, Pro Wrestling Guerrilla and Ring of Honor, all of which he had performed for.

Perkins seemed unsure when asked about a move to NXT, the World Wrestling Entertainment developmental territory he had performed for in 2009 when it was known as Florida Championship Wrestling.

“Who knows? Not sure if I'm their type of guy tho.” – Rappler.com