Facebook Twitter Copy URL
Copied
The Ateneo Blue Eagles can shut down their vulnerabilities within the blink of an eye, and before you know it, they’ve regained their rhythm in the half-court, and have returned to their hallmark of efficiently run sets

MANILA, Philippines – To absolutely no one’s surprise, the Ateneo Blue Eagles are still the best team in Philippine collegiate basketball.

You’d be hard pressed to look for any significant chink in Ateneo’s armor. They don’t go to the free-throw line all too often (18.6% free-throw rate, dead last). They belong in the bottom half of the league in terms of turnovers (18% turnover percentage, sixth in the UAAP).

What amounts to weaknesses are, in reality, mere annoyances. Ball pressure seems to work in terms of knocking Ateneo slightly askew from their carefully crafted half-court sets. Aggressive pick-and-roll coverages (e.g., hedging, trapping) make ball handlers hesitate for a beat longer, enough to delay their sets at minimum; at most, it’ll force uncharacteristic sloppiness that leads to rushed possessions or turnovers.

But by tweaking their approach ever so slightly in subsequent possessions – running a different set, plugging in different players, putting players in different parts of the floor, etc. – Ateneo can shut down those vulnerabilities within the blink of an eye.

Before you know it, they’ve regained their rhythm in the half-court, and have returned to their hallmark of efficiently run sets. 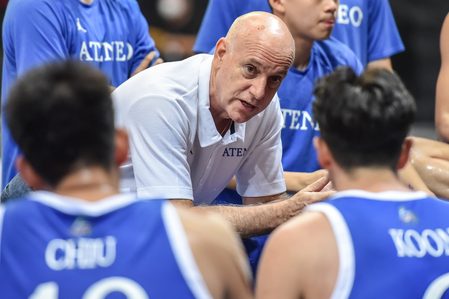 To the naked eye, Ateneo’s offense seems intricate and complex. While there are several moving parts, the beauty of their offense lies in its inherent simplicity; when most teams run offense for the sake of running an offense, Ateneo runs their offense not only with a clear goal in mind, but also with a plan as to how they want to achieve that goal.

Both the goal and the plan are simple: we want to score in the most efficient manner; scoring efficiently comes through creating an advantage over the defense in such a way that they have to defend a perceived threat at the expense of ignoring another threat.

Zoom in and watch Ateneo’s half-court sets, and they run pretty much the same two or three actions, all of which are combinations of ball-screens/pick-and-rolls, handoff actions run by their big-men up top (often called “Delay” sets) or on the elbows/high post (called “Elbow” sets), and sets based on the “UCLA” offense popularized by legendary UCLA coach John Wooden.

These actions are by no means mutually exclusive. They are different ways of arriving at one basic basketball tenet: the reliance on the pull of the big man (in several instances, Angelo Kouame) rolling to the rim, otherwise known as “roll gravity.”

Let’s start out with something simple: 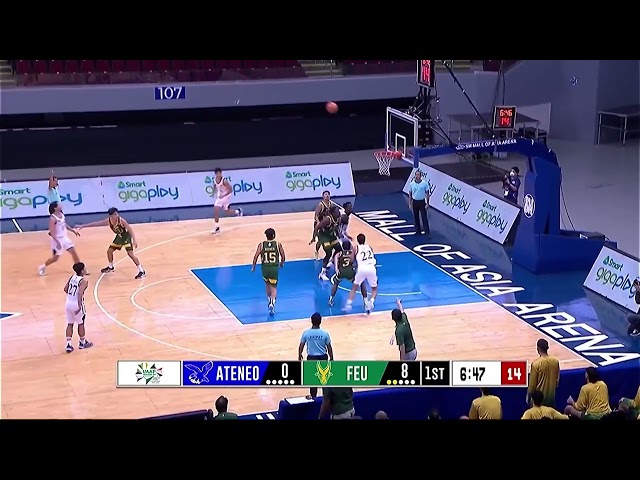 Kouame sets a simple “drag” screen for Dave Ildefenso, and FEU commits a basic mistake: miscommunication in terms of what pick-and-roll coverage to run. The on-ball defender (Ildefonso’s man) thinks it’s a switch, so he sticks to Kouame when he rolls; the roll-man defender (Kouame’s man) thinks it’s drop coverage, where he drops back in a contain position, ready to intercept a potential drive.

The confusion in coverage results in Ildefenso being left all alone to shoot the three, which was born out of Kouame simply rolling to the rim and creating confusion.

When you add a third component in a pick-and-roll involving Kouame, the magnitude of his roll gravity is exemplified further. 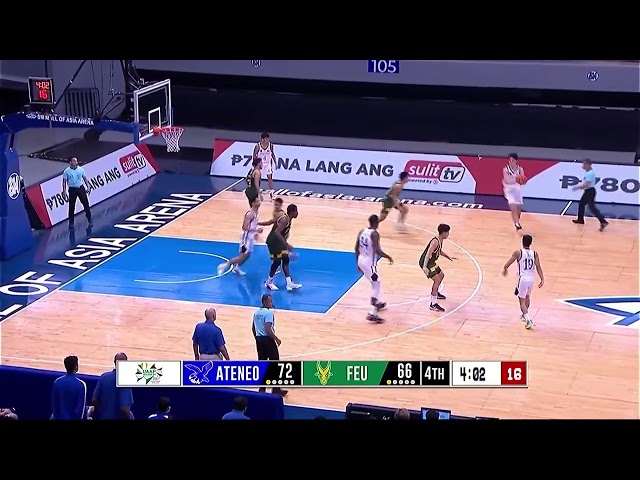 Give Ateneo time to probe holes in the defense, and they’ll more than likely find one. Their patience breeds complacency from opponents. They swing the ball back and forth in the possession above till they find something they can work with: a Kouame ball-screen for Tyler Tio, with Ildefonso parked on the wing.

Watch RJ Abarrientos – he’s forced to help onto the rolling Kouame, called “tagging the roller,” which leaves Ildefonso wide open on the wing. Tio subsequently swings the ball to Ildefonso, who has all the time in the world to drill the shot.

The role of the “tagger” on defense can be tough. Your “tag” on the roll man has to be sufficient enough to discourage a pass, all while keeping tabs on your original assignment left open on the corner or wing. The instinct to run toward the man left open can be too strong to resist; Ateneo preys on such instincts to produce efficient scoring. 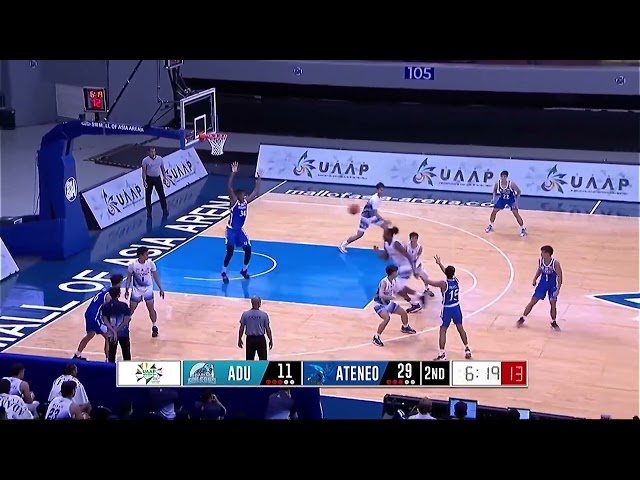 Ateneo runs “Elbow” action with Kouame on the right elbow – he hands it off to a curling Jolo Mendoza, who draws a double team around the handoff. The double allows Kouame to roll to the rim, in turn attracting the “tagger” from the corner. Simultaneously, Raffy Verano lifts from the corner to the wing – termed as “Shake” action – which places the tagger between a rock and a hard place.

As the tagger, you have a choice to make: stick to Kouame and discourage a pass/contest a possible layup or dunk (more than likely a futile endeavor due to the size discrepancy), or recover toward Verano and take away a potential open three.

The tagger chooses the latter, and Kouame is left alone for the wide-open dunk.

(Credit must also be given to Forthsky Padrigao, who looks at Verano to fool the tagger into thinking the ball will go to the wing and baiting him to choose Verano, only to pass to Kouame once the tagger commits to Verano.)

Perfecting the basics of the pick-and-roll allows Ateneo to run more intricate sets that suffer little-to-no fall off in terms of execution and effectiveness. Their complex “UCLA” sets – which starts off with the ball-handler passing to the wing and making a “UCLA” cut – is such an example.

There are many moving parts, but it all arrives at one endpoint: Kouame involved in ball-screen action, with Deschon Winston tagging Kouame’s roll and leaving Ildefonso open on the wing for a three as a result. 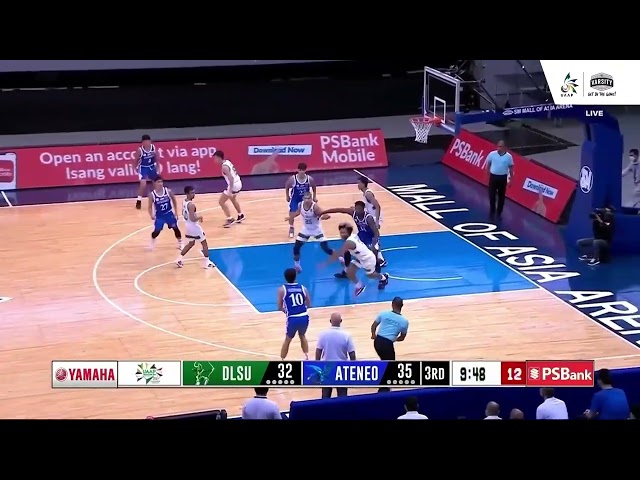 A different endpoint to the UCLA set can also emerge: 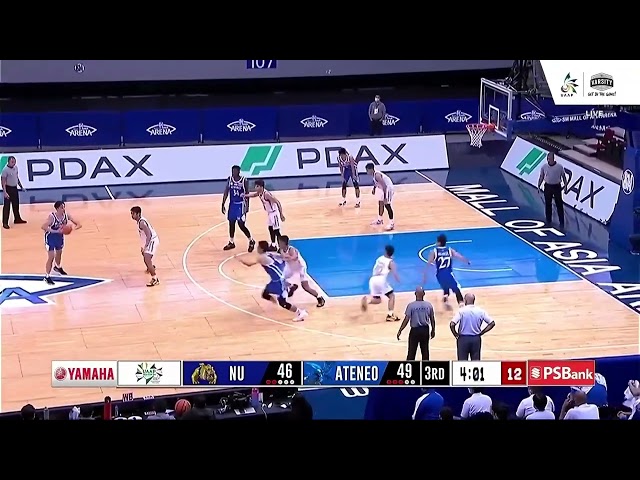 An elbow-to-elbow pick-and-roll between SJ Belangel and Kouame, with Kouame rapidly slipping the screen, Belangel drawing an aggressive coverage, and subsequently passing to the open Kouame. Again, a set with many moving parts, flowing seamlessly until an efficient shot is obtained.

Such efficiency has proven itself through the numbers. Effective field goal percentage (eFG%) is a more accurate metric of a team’s shooting efficiency, taking into account the fact that three-point shots are worth more than two-point shots. Ateneo’s efficient approach has been justified by their eFG% of 50.4%, which leads the UAAP and is 5.6 points better than league average.

When stripped down to its very core, that is the gist of the Ateneo Blue Eagles offense. It doesn’t matter how you arrive at the endpoint – whether you run a basic pick-and-roll, run your set through your bigs up top or on the high/low post, or run misdirection motion sets.

What matters is that you actually manage to achieve your endpoint. And the Blue Eagles’ philosophy, while seemingly complicated and difficult to grasp, is really quite basic: simplicity with the highest degree of execution never before seen at the UAAP level.