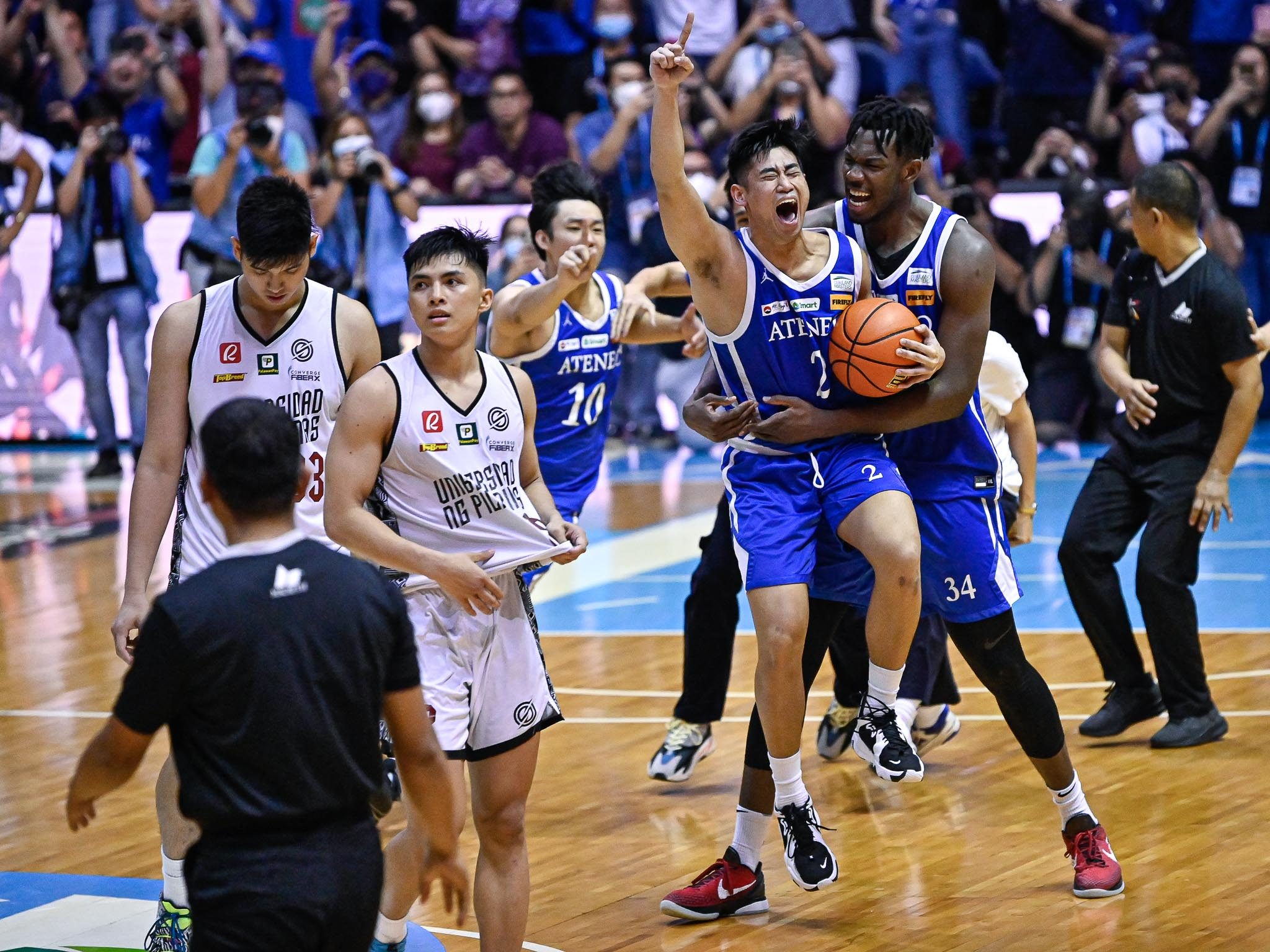 BACK AND FORTH. The Ateneo Blue Eagles celebrate winning the UAAP Season 85 men's basketball championship at the expense of the UP Fighting Maroons

MANILA, Philippines – For the last five years, the UAAP seniors basketball championship has stayed firmly rooted on Katipunan Avenue, but unlike the old days, Ateneo no longer holds sole credit for that streak.

Now, the Blue Eagles share that distinction with their neighbors across the street in UP, whose Fighting Maroons have earned their way back to the top with a historic title in Season 84 at Ateneo’s expense.

Gone are the days when UP was the doormat for Ateneo and pretty much every other school in the league. Gone too are the times when the Maroons would watch the Eagles’ side of Katipunan light up in fiery celebration while down the road it was cold and quiet.

As its Season 84 run proved, the Maroons are more than ready to sustain their budding neighbor rivalry and are done watching others rise while they stand pat.

Although UP’s title defense only lasted seven months due to the league’s unique pandemic sports calendar and Ateneo’s resurgent title run in Season 85, it was more than enough to maintain the respect Blue Eagles head coach Tab Baldwin has with Katipunan’s other formidable basketball program.

“When you’ve got defending champions with pretty much an intact roster, they’re hard to knock off. We didn’t get any favors out there, and you’ve got to knock out the champion,” he said in his championship presser.

“That [Game 3] first half was close to a knockout punch, but with UP, it’s not. They fought back and they came perilously close.”

As a testament to how far the Maroons’ program has evolved, the Blue Eagles’ “knockout punch” came in the form of an 18-point first quarter lead, which they sustained with a 20-point peak until the third frame.

Around five to seven years ago, a 20-point Ateneo lead over UP was practically a death sentence, no matter how early in the game it was. Reporters can pre-write the Maroons’ losing fate without fail at least an hour before the final buzzer.

But times have changed. Even in a stage as big as Game 3 of the finals, the present-day UP squad calmly launched a huge comeback to get within three points, before Ateneo shut the door for good with a 75-68 title-redeeming win.

Those kinds of moments are why Baldwin refused to let the Eagles’ guard down even for a single second against the Maroons – a luxury he once had in years’ past – and why this rivalry has transformed into must-see TV every single time it’s on the schedule.

“The Battle of Katipunan is cool. I think it’s really cool. We are neighbors, our universities share a lot. It’s amazing when you look up at the stands, hear the alma mater [hymns] being played, and see how many maroon shirts have their fists up during the Ateneo anthem, and vice versa,” he continued.

“It’s really kind of cool and unique. I’ve talked a lot about the UAAP, its place in the world’s stage, and people don’t know about it. But it’s unique, it’s special, and I think you’re gonna see more of Ateneo and UP fighting it out.”

In 2022 alone, the Maroons and Eagles finished with a head-to-head record of 5-5, resulting in a title for each side. Those numbers alone tell the story of what’s in store between the two for years to come. – Rappler.com