5 observations from the UAAP first round 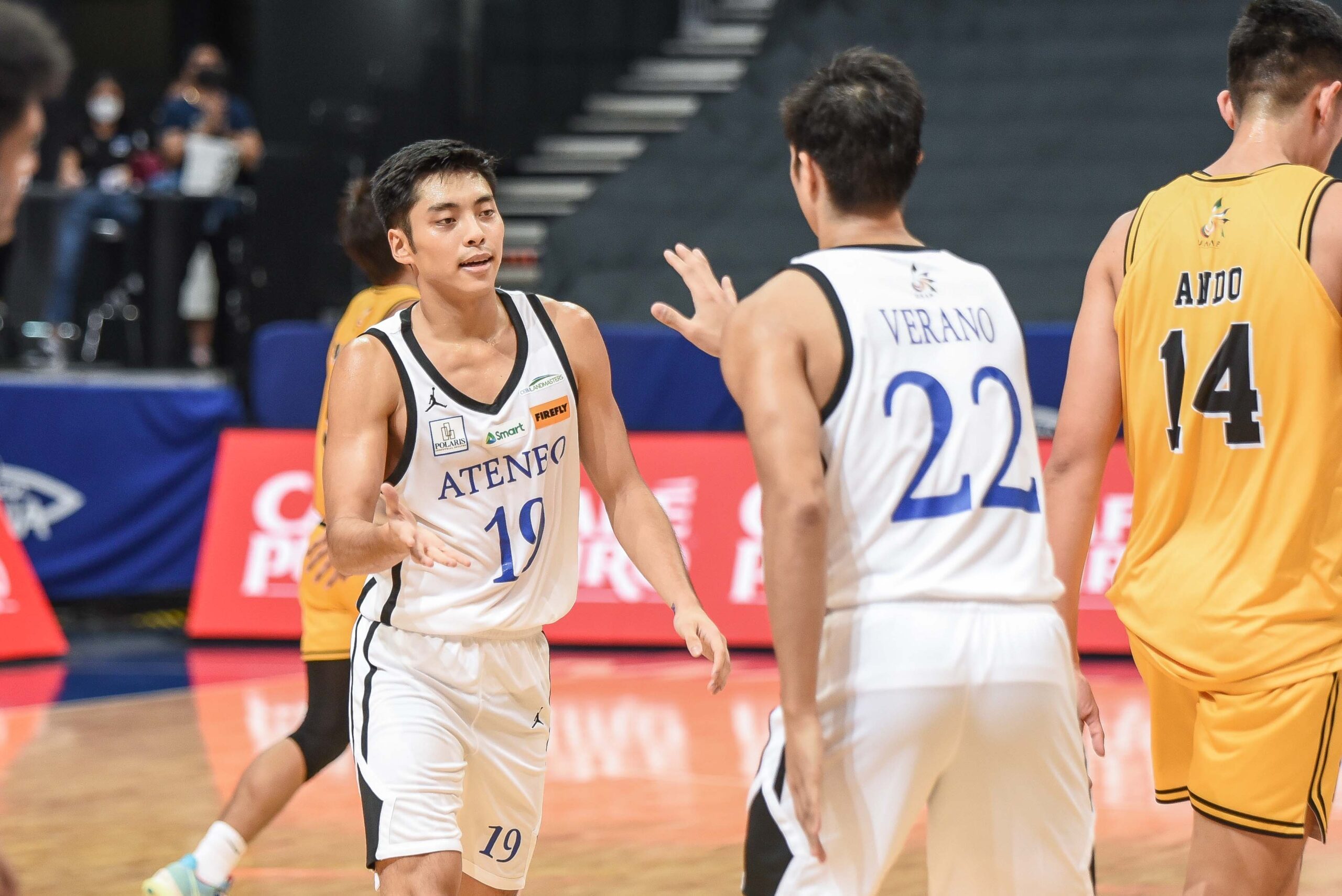 MANILA, Philippines – The first round of the UAAP Season 84 men’s basketball tournament has come to a quick close.

Leading the elimination round are the undefeated Ateneo Blue Eagles (7-0), whose quest for a fourth consecutive championship is on the right track.

UP, a team which made headlines during the prolonged offseason because of their top-tier recruits, has justified the hype surrounding them with a stellar 6-1 showing, good for second place.

Here are some observations from the action in the first round:

Ateneo is a 16-man superstar

UAAP teams should consider themselves fortunate if they have a player or two who can provide everything that’s needed and essential to winning a collegiate basketball game:

The ability to hit jump shots, to penetrate the rim, to cut without the ball, to expend energy in motion movement, to hunt mismatches, to work in the post, and to create for others.

The tasks are just as essential on the other end, with importance in playing multiple defensive coverages such as drop, switch, blitz, and everything else.

And when things break down, well, it helps to have someone like Angelo Kouame send opponents’ hopes and dreams to the dumpster.

At their best, when the machine is humming to a melodic beat, the Blue Eagles have 16 of those guys. We’ve heard a lot of “16 strong” monikers given to collegiate contenders in the past. Never has there been a dynasty that resembled what it actually means to have that superpower like Tab Baldwin’s Ateneo teams.

It’s tough enough to deal with an opponent where an individual or two has stretches where their ability to be the best player on the court is an insurmountable task.

It’s a totally different monster when you deal with an entire squad who do it from start to finish.

Two years and a pandemic later, that hasn’t changed. Ateneo is a cut above the rest of the league. Frankly, the gap isn’t close.

UST got a good one

Joshua Fontanilla is one of those players who looks like he was born to play basketball. One of the signs that point that out is watching how a hooper moves on the court. Is he sprinting? Or is he gliding? Because if it’s the latter, the physical aspect is in coordination with the mental methodology; like a computer processing what the floor looks like before the inevitable attack comes.

UST’s Terrence Romeo-like standout can score in multiple ways. Leave him open from deep? He’ll drill the three-ball. Give him the lane to attack? He’ll gladly take it. Contact doesn’t always throw him off as well, because he maneuvers well enough to avoid defenders with an array of side-steps, hesitation dribbles, spin moves, and pump fakes.

He’s not the unconscious scorer that Romeo was but Fontanilla looks like a more patient and trusting college player. He also doesn’t do a lot of chirping, preferring to let his game do the talking. UST’s got a good one. If they had a reliable big to man the paint on both ends of the floor, they’d possibly be in Final Four conversations, with Fontanilla front and center.

There’s a lot to love about the game of UP’s Carl Tamayo, who has “future UAAP MVP” written all over him. He can score in or out, bang in the paint or guard in the perimeter, and has that “go-to guy” quality every championship-aspiring team needs.

His mindset? It’s fantastic. After he makes a big shot, stop, or play, there’s no extra “rah-rah-rah” nonsense. He does his job and proceeds to the next play. Very business-like.

In the first half of UP’s game versus FEU, he attacked Emmanuel Ojuola in the paint and scored on a short jumper after absorbing contact. This is a rookie. Ojuola has the body of a grown man. Did he celebrate his minor accomplishment afterwards? No. Tamayo ran down the court and turned his attention on defense. This boy is special in more ways than one.

As for Zavier Lucero, well, at this point, it’s hard to justify through words what a special talent he is. For more on that, view here.

UP has now won six straight games in the UAAP for the first time since Season 67 in 2004. They’ve earned the right to be considered the second-best team in the league behind Ateneo. New head coach Goldwin Monteverde has done a spectacular job in his first year with the program by implementing a system that’s creative with its set plays and a rotation that seems to put players in at the right time depending on what’s required by the contest.

The talent on the Maroons is palpable, but as UP fans will tell you themselves, it takes more than talent to compete and play up to your potential. Cohesion is mandatory. This season’s team has a lot of it.

La Salle is Jekyll and Hyde

De La Salle is the team this season with the most variance in terms of production on both sides of the floor. They can look like title contenders for a five-minute stretch then turn into the least effective squad in the league right after. The statistics prove that too, since the Green Archers lead everyone in defensive rating (85.3) but rank dead last in offensive rating (87.6).

Head coach Derrick Pumaren is aware of the issue and boils it down to execution.

“I think that’s been a problem since game one: the execution is not there,” he said.

The long arms of Justine Baltazar, Michael Phillips, and Bright Nwankwo cause problems for DLSU’s opponents who plan to score in the paint. Speedy and pesky defenders such as Deschon Winston and Mark Nonoy, when applying the press, can be opportunistic in creating turnovers.

The lack of spacing by the defensive-oriented lineups, however, yield issues on the other end. Some of it is hesitancy by the guards to take jumpers, although the recent return of Evan Nelle’s shooting stroke might fix some of it. However, Winston, who did play well down the stretch against Adamson, needs to fight through the physicality being allowed by the refs and take his shots even without getting separation from his defender.

When Nonoy’s long-range game isn’t working for him, DLSU’s limited offense looks even clunkier. Way too often does La Salle aim to establish Baltazar for scoring opportunities in the post, only for defenders to take him out of his comfort zone. The time required to get their bigs the ball near the rim deplete the shot clock for La Salle, resulting in rushed and ineffective shot attempts.

Kurt Lojera has played the role of a safety net with timely midrange jumpers and penetration, but he doesn’t do it enough to be a go-to option. That isn’t his role. La Salle’s tendency to go on offensive dry spells cost them against UP and nearly hurt them against an opponent inferior in talent in Adamson, which would have put a dent in their aspirations to get a twice-to-beat seed.

For La Salle to secure an advantageous Final Four spot and possibly make the finals, they’ll need to be more creative with sets to get their best players open, as opposed to their current trend of being out in the perimeter, figuring a plan B or C against the defense, with less than 10 seconds on the shot clock.

The fans make all the difference in the world

There’s no feeling of passion quite like the collegiate spirit.

There are pros to having empty arenas for the UAAP games, most especially getting to note which players are naturally gifted hoopers who don’t need boisterous crowds to inspire their play or won’t get deterred by a few hecklers.

But the UAAP just isn’t the same without the sounds from around the arena, whether that’s passionate singing of school cheers or hearing someone scream, “HINDI NAMAN YAN FOUL EH! (That’s not a foul!)”

The in-crowd banter between opposing team’s supporters is always fascinating to observe, sometimes as much as the action that takes place on the court.

The singing of school hymns presents a feeling of unmatchable pride for the winning side, and a feeling of solace for the defeated counterparts.

One can argue that the UAAP is where, to borrow a popular NBA phrase, “the amazing happens.”

However, there’s no amazing without the roars from the fans. – Rappler.com