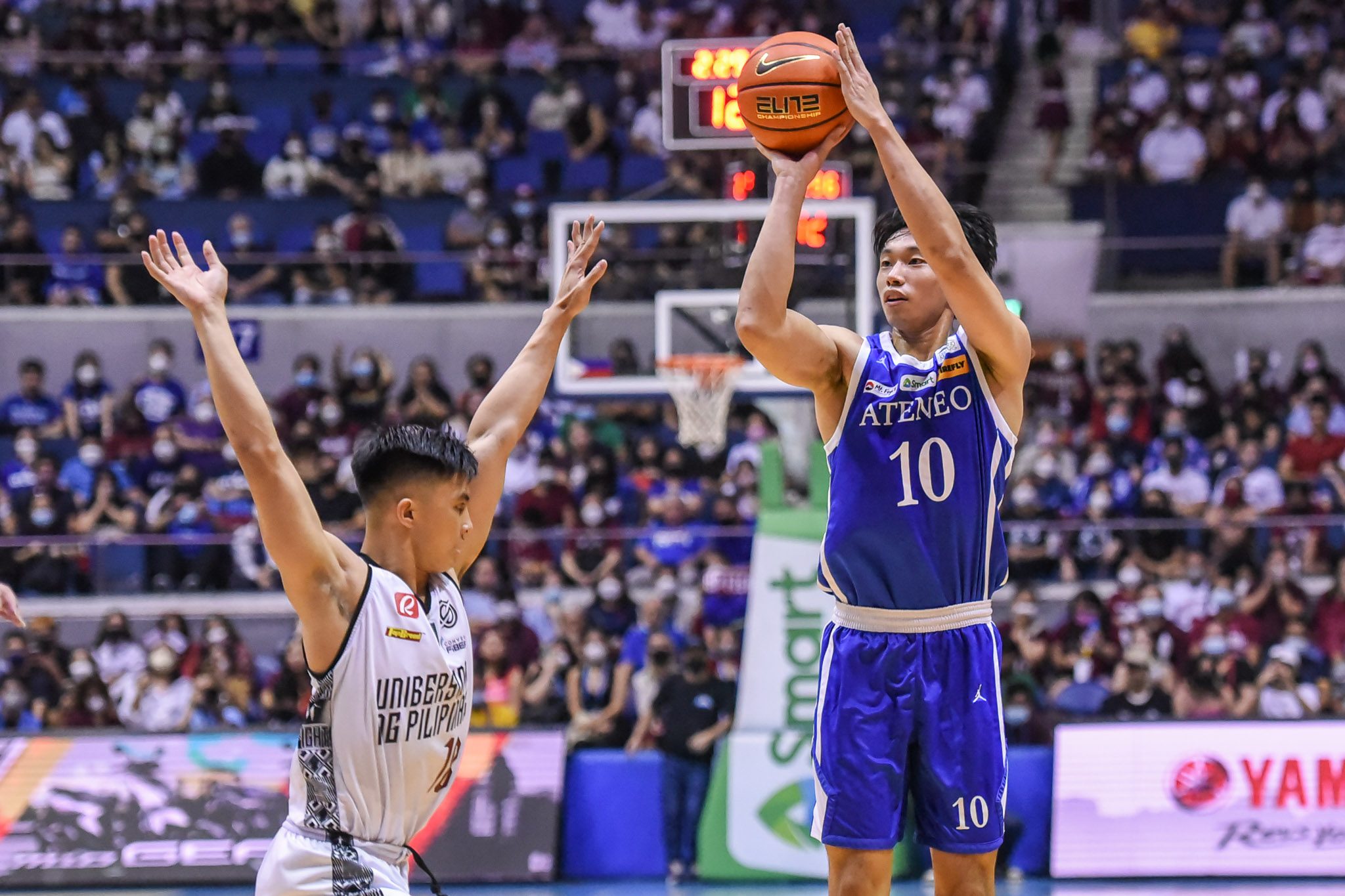 STREAKY. Ateneo star Dave Ildefonso attempts a jump shot over the UP defense at the UAAP Season 85 men's basketball tournament

MANILA, Philippines – The Ateneo Blue Eagles denied a late comeback by the UP Fighting Maroons to clinch the second UAAP Season 85 twice-to-beat incentive off a 75-67 win at the Araneta Coliseum on Saturday, November 26.

Dave Ildefonso led the second-half pullaway by scoring 12 of his 15 points in the third quarter, while reigning MVP Ange Kouame churned out a monster double-double of 14 points and 17 rebounds to help Ateneo rise to a 10-3 record.

Due to the Blue Eagles winning by more than 5 points, they now own the superior quotient over UP for the first seed in the event of a standings tie at 11-3.

However, standing in Ateneo’s way is a desperate Adamson squad still trying to secure an outright Final Four berth with a win on Wednesday, November 30, 4 pm.

Coming off a 45-49 deficit late in the third quarter, Ateneo took advantage of a heated UP side that got slapped with two technical fouls on Henry Galinato and Harold Alarcon in the period’s waning moments, and entered the final frame with a 53-49 lead.

With momentum on their side, the Blue Eagles eventually peaked with a 15-0 run bridging the final two frames, capped with a huge Ildefonso triple at the 7:31 mark of the fourth for the 60-49 separation.

Carl Tamayo tried his best late in the game to will the Maroons back and sank a big three to get within 66-73 with 1:55 left in regulation.

However, time was just not on the defending champions’ side as Ateneo simply controlled the clock and the free throw game on the way to the eight-point win.

“It was really hard work [for me], but not nearly as hard as the work the team put in,” said Ateneo head coach Tab Baldwin.

“Their effort in the second half, in the annals of my coaching time, that’s as gutsy as it gets. And why? Because that’s what UP demands. If you don’t give that, they will run over you. That’s the way they are. Like it or not, you got to deal with it.”

Tamayo left everything on the floor in the loss with a 20-point, 10-board double-double, but it was just not enough as Alarcon was the only other double-digit scorer from UP with 10 points and 9 rebounds.

As Ateneo heads to its last elimination round match against Adamson, UP will now just regroup as it awaits its eventual Final Four seeding and opponent.