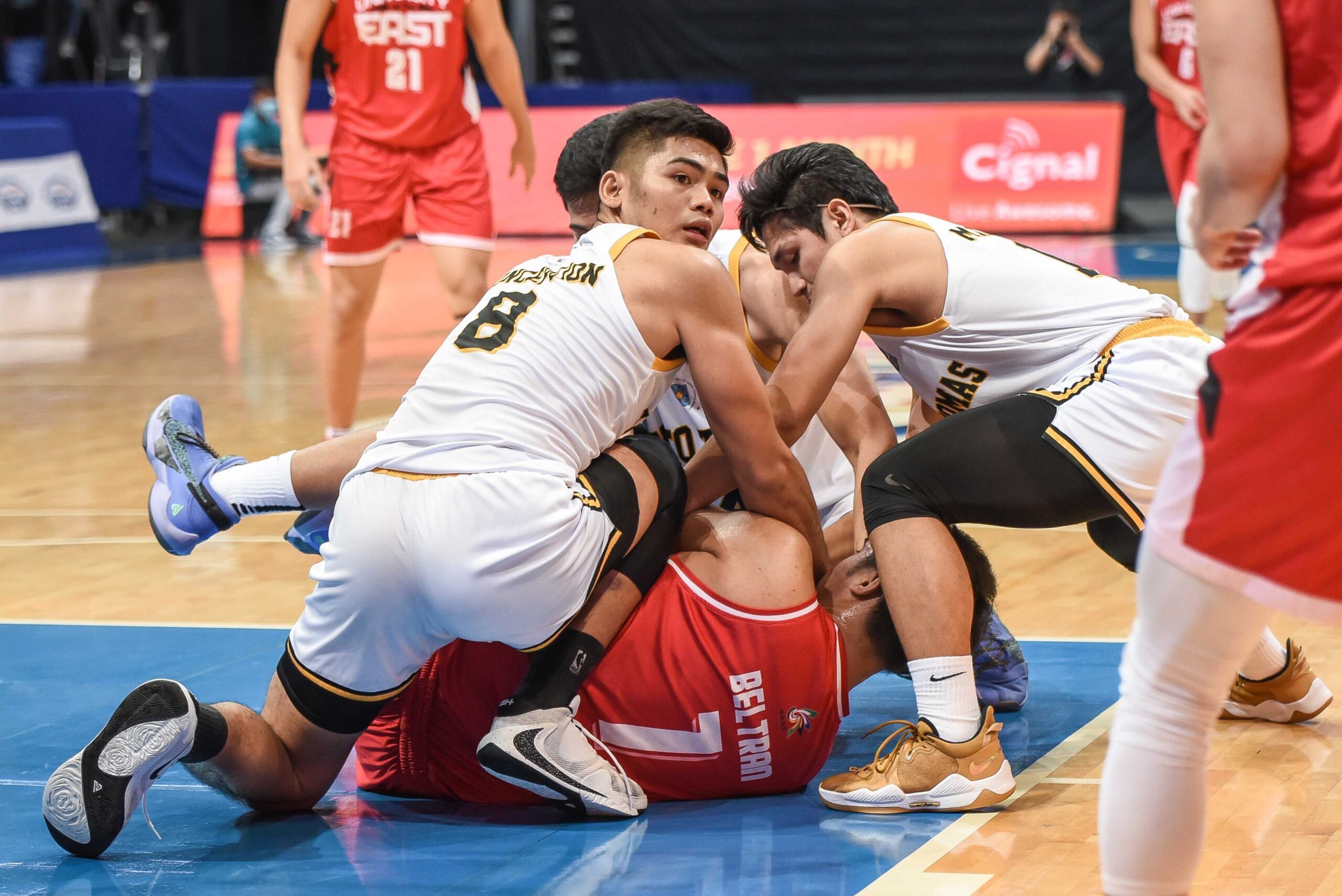 SCRAMBLE. Sherwin Concepcion and the UST Tigers gang up on UE's Allan Beltran

MANILA, Philippines – The UST Growling Tigers started the UAAP Season 84 second round strong off a 72-61 comeback win over the winless UE Red Warriors at the Mall of Asia Arena on Tuesday, April 12.

The Tigers snapped a three-game losing streak to rise to a 3-5 record, and kept the Red Warriors searching for a breakthrough at 0-8.

Sherwin Concepcion, one of the league’s top snipers after the first round, did what he did best once again with a 17-point, 11-rebound double-double on 6-of-10 shooting and 5-of-9 from three.

Big man Dave Ando, meanwhile, had himself a great outing with 16 markers and a game-high 12 boards off the bench in under 23 minutes.

UE kept its hold on the game well into the third quarter, and led, 47-40, at the halfway point off a steal and pull-up triple from Kyle Paranada.

However, the Red Warriors eventually fell too much in love with the long ball, and the Tigers capitalized with a methodical 14-3 fightback, capped off by a looping Paul Manalang floater with 11 ticks left in the third.

Despite having little to no success from downtown, UE insisted on a five-out offense for pretty much the entire final frame, and predictably, UST kept the upper hand, and capped off the night with a Concepcion dagger trey with 35.3 seconds left in regulation.

“We just gutted the game out. The first three quarters went back-and-forth, and both teams were neck-and-neck, but we found the right guys to score, and Ando had a career-high. That was a big help,” said UST head coach Jinino Manansala in Filipino.

Paranada eventually quieted down after a nine-point, three-triple third quarter, but still scored a game-high 17 plus 3 steals in 22 minutes. Go-to guy Harvey Pagsanjan, meanwhile, backstopped the losing effort with 16 points and 9 rebounds.

A tougher challenge will greet UST after a one-week break as it goes up against De La Salle Green Archers on Tuesday, April 19, 12:30 pm, while UE gets another crack at upsetting the mighty Ateneo Blue Eagles at 4:30 pm.